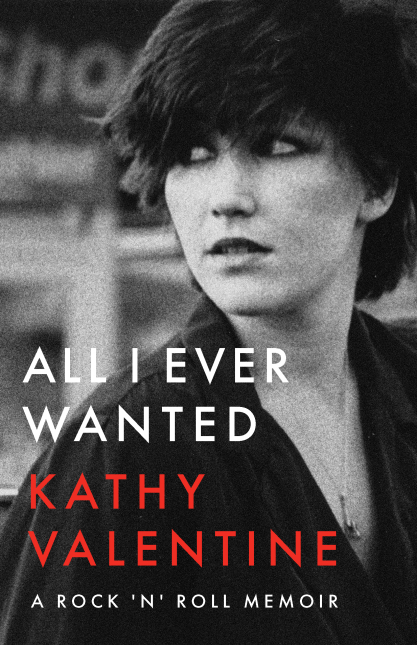 I can’t recall if it was Sigmund Freud, Arthur Janov, or Wolfman Jack who first posited the theory that many performers are catapulted onto the stage to compensate for parental loss or neglect. “They didn’t want me, so they made me a star,” John Lennon famously sang of his largely invisible dad and a mother he rarely saw growing up (and who died suddenly when Lennon was 17 and just beginning to reconnect with her).

Add Go-Go’s bassist and songwriter Kathy Valentine to the clinical-trial test group exploring our thesis. In her intelligent and layered memoir, All I Ever Wanted, she recounts a life with a mom more buddy than parent, and a mostly absentee dad who chose his newer, second family over her when she was still a teenager.

Valentine sketches a picture of a lonely, complicated childhood in Texas. Always something of an outcast — with fierce independence, smarts, and a skeptical attitude toward power and authority figures — she was rock ’n’ roll before she ever picked up a guitar. Valentine could get good grades when so inspired, but she eventually drifted away from mainstream recognition and decided to pursue life as a guitarist in a rock band.

She joined the Go-Go’s relatively late in the band’s gestation, just as it was about to record its first, and landmark, album, “Beauty and the Beat.” The LP went on to become the first by an all-woman band to hit number one on the Billboard charts. Band members hated the record when they first heard it, feeling it diluted and softened their L.A. pop/punk sound, but they came around when the album became a huge hit.

While there’s plenty of sex, drugs, and rock ’n’ roll in the pages of this fine memoir, Valentine’s intelligence and perspective never allow the narrative to become a superficial, titillating VH1 “Behind the Music” story. Instead, we read about interesting interactions with Bob Dylan, Keith Richards, and especially Blondie drummer Clem Burke, the latter a longtime Valentine romantic partner.

After her band had made it, she recalls playing in her estranged father’s hometown of Tulsa. After the show, father held daughter tightly and said quietly, “I was wrong. You have done great for yourself.” Valentine recalls, “It was an unexpected admission, and I didn’t realize how much I wanted to hear it.”

The Go-Go’s rise was sharp and brief. “We Got the Beat,” “Our Lips are Sealed,” “Head Over Heels,” and “Vacation” (the last two co-written by Valentine) were their biggest singles. Years later, when their record label wanted to put out a “greatest hits” collection, they acknowledged not having enough songs to fill it. But in their short, creative burst on vinyl, they created some excellent, catchy, buoyant power pop that still sounds great today.

Valentine is equal parts acute observer and insightful participant when she dissects why the Go-Go’s broke up as their fame began to wane. The short answer: money and songwriting credits. She recounts how she struggled as the other former members fared better than she did in the immediate period after the breakup.

In her view, she tried to stay true to her roots by forming another rock band that didn’t click with the public. The others opted for, in her opinion, less rock-oriented pursuits and achieved greater success, especially lead singer Belinda Carlisle, who scored several solo hits after the Go-Go’s parted ways in 1985.

With the gift of time, therapy, and a lot of reflection, Valentine tells her story clearly and insightfully. For example, she gives an unflinchingly honest portrait of her entry into Alcoholics Anonymous and sobriety as she struggled to find her footing post Go-Go’s.

Without giving away the story of a life still being lived, it’s nice to read in the epilogue about how generally well everyone — and Valentine’s relationship with them — has fared in recent years. She reaches a new level of maturity in her connection with her mother and finds closeness with her father in the final months of his life.

The Go-Go’s are back on the scene with a new album and a Showtime documentary. Hopefully, they’ll get the respect they deserve as a groundbreaking and flat-out-good band. While I have mixed feelings about the “coolness” of the Rock ’n’ Roll Hall of Fame, if any band of the last 40 years deserve entry, it’s them.

Valentine doesn’t discuss the hall in her memoir, and she tends to shun some of the “respectable” attention from the music business. Still, she’s justifiably proud of her time in the Go-Go’s and would probably love to play a short set onstage in Cleveland with her former bandmates on awards night. She’s more than earned it.

Michael Causey is host of the radio program GET UP! on WOWD 94.3 FM every Monday morning on takomaradio.org in Takoma Park, Maryland. He generally doesn’t have the beat but digs the Go-Go’s.