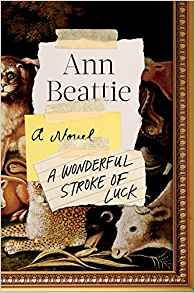 A Wonderful Stroke of Luck, Ann Beattie’s 21st book, is extremely smart: edgy, infectious, witty, and yet a bit brooding. Some readers will wonder if it is too smart; if, in style and tone, intelligence has conquered feeling in paralyzing ways. It certainly seems to have done so in several of the major characters. They are oddly desperate and oddly blocked.

We meet Ben and his classmates during their senior year at Bailey Academy, a co-ed New Hampshire boarding school designed to discover and promote the ambitions of a privileged generation — and/or its parents.

Beattie’s handling of how these classmates interact, especially how they speak to one another, is remarkable. So is the anonymous narrating voice, who seems, at times, like an invisible overseer of the teenagers’ potentialities and handicaps — like someone who may have graduated from Bailey a decade or so back and can guess what they’re going through.

Positioned somewhere in between this voice and those of the students is Pierre LaVerdere’s. This master teacher is a complex personality who challenges his students in ways that don’t always seem responsible. LaVerdere manages the school’s honor society, but honor means different things to different people.

LaVerdere is youthful and easily relates to his charges. Sometimes, he seems too close to them; sometimes, his closeness feels like an act — a test. He is a brilliant talker who knows how to take full advantage of his charm. But one suspects a hollowness within.

The students are going through the usual crises: Their nuclear families are breaking down through divorce and/or illness. Generational tensions are accelerating. In September of 2001, the fall of the Manhattan towers and part of the Pentagon introduces an unfathomable element into their lives.

Has something about dependable dreams and life patterns changed forever?

Beattie, to her credit, resists the temptation of laying it on too thick. She carefully times the occurrences, character, and intensity of her 9/11 references. They invade Ben’s consciousness — or the reader’s — in ways that compromise progress in Ben’s adult life. He and his Bailey cohort are having trouble betting on the future or even gauging the “really” in “What do I really want?”

While one would assume that Beattie would develop this dimension more fully via a hefty treatment of Ben and his fellow Bailey grads in college, that does not happen. Instead, Beattie jumps over the university years and continues the narrative with portrayals of unsteady career pursuits and unsteady relationships. We watch how these empowered young adults, described magnificently from their mid-20s into their mid-30s, stumble in the shadows.

Many of them spend some of that early career time in New York City or nearby suburbs. Ben chooses the easiest job by which he can make a decent living: writing computer code. He lives alone. He has lots of sexual encounters and spends time imagining longer-term intimate relationships, but he just can’t get there. The concept of things being “for the long term” seems to belong to another epoch.

When an old friend from Bailey, a woman he had been fascinated by, comes back into his life as part of a lesbian couple asking him to impregnate her so the couple can have a child, he is seriously shaken. He can’t figure out how (or if) such a deed would redefine him. In the shadow of 9/11, betting on the future is not an available mindset.

Pierre LaVerdere also comes back into his life, exhibiting an unexpected neediness. But, by then, Ben is beyond any compassion for this man whom he once idealized. Perhaps with justification.

Beattie is a magus of atmosphere. She captures the malaise of her disoriented characters whose spirits have been suffocated by the terrorist attack. They remain numbed by a trauma that they have not found a way to assuage. They are not truly aware that they need to face it.

Perhaps the author is suggesting that few of us have faced it; its damage is buried and ongoing. So, the question is not the cheesy, “Where were you on 9/11?” but rather: “Do you know if and how you may have been damaged by 9/11?”

A Wonderful Stroke of Luck is a powerful, nuanced study of arrested development, filled with Beattie’s sardonic wit. It is captivating, thought-provoking, and disturbing.

Children of the Ghetto: My Name Is Adam