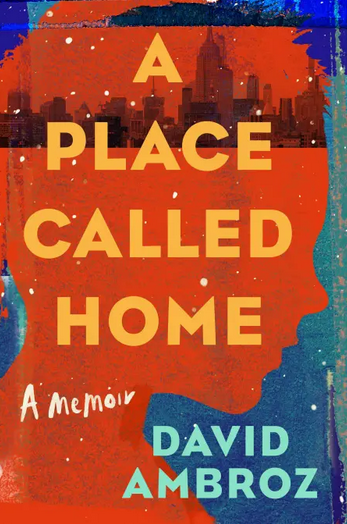 In A Place Called Home, David Ambroz doesn’t really write much about a place he could call home. Instead, he writes about all the different places he ended up living: shelters, temporary apartments with his frequently incompetent mother, in the foster system, and in a juvenile facility because authorities couldn’t find anywhere else.

Right away, the reader is walking in his shoes: the cold, soaked, too-big sneakers the child wears as he slogs through snow in Manhattan at Christmastime, trailing his mother and two siblings in a search for housing for the night. They end up at a men’s shelter. The man who opens the door lets them in reluctantly, warning his mother that all four of them must share one cot, and that she can’t let the kids out of her sight:

“This place isn’t safe for them.”
“You think I don’t know that already?”

It’s a story of struggle against enormous odds and infinite random cruelties. But it is not a story without hope. Ambroz’s mother gestures around the shelter and asks, “Is this what you want?” Even though he’s only 5, Ambroz knows what she’s asking, and what his answer is:

Maybe it’s a spoiler to say that Ambroz has managed to do all those things. After growing up homeless and in foster care, a combination that keeps many people poor and struggling all their lives, Ambroz managed to get through college and become a nationally known poverty and child welfare expert and advocate. He currently serves as the Head of Community Engagement (West) for Amazon.

How did he survive and go on to accomplish so much?

Part of it is that his mother, in between frequent descents into mental illness, is a nurse who manages to find work — even though she repeatedly quits nursing jobs when her illness strikes. She values education, is well-spoken and resourceful. She finds her children decent places to live before either arguing with the landlord and leaving or deciding that aliens are monitoring the place and that her family must go.

Some of Ambroz’s survival comes from the occasional charity or thoughtfulness of relative strangers. A week at camp, where everyone is kind and he can eat all he wants, courtesy of a parishioner at a church they’re temporarily attending. The convenience store owner who lets him pick out the sandwich he wants and then doesn’t charge his mother for it. “There is a message in these kindnesses that tell me there’s the possibility for a better life,” he writes, “You matter. We care. You are worthy.”

He gives himself some credit for their interest, noting that people who are predisposed to be kind to kids are also interested in what they have to say. “When they ask me how I’m doing, I answer cleverly, “Well, I’m fine, thank you. I’d love to hear your opinion on the Iran-Contra affair.” He notes that being smart helps him get more attention and support.

Being smart also serves him well in school. He loves school. He’s good at it and makes good grades when he gets the chance to go. And, of course, it’s a source of food.

But still, he notes, children in poverty are given kernels of assistance but are rarely rescued from their circumstances. He blames part of this on our societal protection of “the sanctity of the family.” His mother’s bouts with mental illness meant she actively abused him, at one point throwing him down a flight of stairs. He tries to report her, blurting out what happened to a counselor at school. But when social workers come to talk to him, they do it with his mother in the room.

He lies, saying no, she didn’t do that. Eventually, though, he admits she did, and the social workers take him away. They have no place to put him, however, so he sleeps the first night in their office and then is taken to a juvenile detention facility:

“Detention facilities criminalize poverty. We remove kids from unsafe situations without hope. Then we put them in a system that further destroys them.”

The other boys sense his homosexuality, even though he doesn’t act on it. He’s attacked by the boys and taunted by the instructors. When he’s released into a foster home, it’s to a couple who use him as free labor and even rent out the now young teen to a local contractor. They rarely let him go to school. Once when he is at school, he faints because his foster parents have systematically denied him food.

It takes Ambroz months to get out of that situation, but when he does, he decides to ask someone else to foster him, “the nicest adult I know.” Holly works at the YMCA, and he’d met her a year earlier at a YMCA camp. She had visited him weekly for a year after that.

He walks three miles to the YMCA to find her and make the request:

“So many people, good, decent people who are capable of loving kids who are not their own, never consider fostering. Or if they do, they have lists of reasons they can’t do it — the timing is wrong, or they don’t have space, or they don’t want to disrupt the lives of their biological children.”

Holly and her husband, Steve, agree to foster him, although they do have kids at home. The transition isn’t smooth, and life with Holly and Steve isn’t always smooth, either, but Ambroz emerges from his time with them being admitted to Vassar. From there, he goes on to law school.

Ambroz can now add to his accomplishments that he’s written a book about a child’s life in poverty, homelessness, and the screwed-up foster care system that isn’t depressing or overly didactic. He offers the reader plenty about how the system works — and how it doesn’t — in recounting the life and adventures of one remarkable boy.

There are more than 450,000 kids in foster care today. Many of them will become homeless when they reach their 18th birthday. He pleads with the reader to reform foster care by decriminalizing poverty and providing wrap-around support, writing that “foster care is an inflection point where we can halt the systemic inheritance of poverty and violence. All of our children deserve this chance.”

The author biography in A Place Called Home notes that Ambroz is now a foster dad.

Susan Storer Clark lives near Seattle, where she is a contributor and writing coach for Real Change, a street newspaper providing opportunity for low-income and homeless people. She is a former broadcast journalist who wrote and reported for the Voice of America and for WRC-TV. Susan has written for the Independent since its inception. Her historical novel, The Monk Woman’s Daughter, was a finalist in the Nancy Pearl contest for literary fiction and was named a favorite in historical fiction in the New York City Big Book award competition. She is currently at work on a second novel.