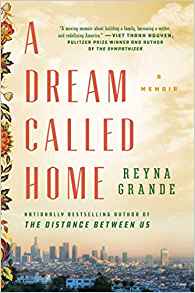 Reyna Grande’s new memoir, A Dream Called Home, begins like many tales of immigration — with an escape. We see a 20-something Grande, loaded into her boyfriend’s car, driving away from Los Angeles and her troubled family to fight for a piece of the American dream. Her weapons of choice: her writing and her education.

Grande is now the author of three novels, a mother of two, winner of the American Book Award, and a U.S. citizen. These are impressive accomplishments on their own, but they are made even more so as A Dream Called Home unspools.

The memoir shows us not only the complex adversities that Grande faced to get to where she is today, but also the everyday dramas of growing up amid poverty, trauma, and the turbulence of immigrant life.

During college, Grande retrieves her troubled teenaged sister from Mexico and tries to raise the girl in her California dorm room. After college, she lives on another sibling’s couch, finds herself underprepared and teaching in a tough L.A. middle school, and then gets pregnant by an older man who is wrong for her at best and straight-up abusive at worst.

She also has deep empathy as a character in her own story. Her older self is able to examine how her mother’s abuse at the hand of her grandmother led to her mother’s behavior later. She understands that her sisters had children in their teens because they saw it as a way both to escape and to have someone to love them.

She reflects on her own actions and expectations, too, understanding that she herself was not immune to the tides of the culture, class, race, and gender roles that stirred nonstop around her.

Still, this is a story with a happy ending. It serves as a testament to the true power of diverse books. Early in the memoir, a writing teacher says to her, “If Sandra Cisneros can do it, you can do it. If Isabel Allende can do it, you can do it.” For Grande, the words of writers and teachers who look like her serve as a trail of breadcrumbs to a life and a voice all her own.

This year, 2018, is one in which memoirs from those often marginalized have shaken up the literary landscape. These include Terese Marie Mailhot’s Heart Berries, a lyrical story by a young First American woman; Alexander Chee’s politics-and-literature-focused How to Write an Autobiographical Novel; Sarah Smarsh’s Heartland, about working-class white Americans; and Pulitzer Prize-winning journalist Jose Antonio Vargas’ Dear America, about his experience as an undocumented citizen.

I can’t help but wonder if these books are a reaction to a political environment heaving with division. Writers understand that we need to use our voices and our experiences to protect our very personhood.

Or maybe these books signify a shift in something else. Maybe they indicate that a growing number of readers want their bookshelves to resemble the country they wish to live in — complicated, diverse, inclusive, and full of a vibrancy worth embracing.

Because 2018 was such a big year, I fear A Dream Called Home will get lost amid the buzz. But even if it doesn’t garner the hype of other memoirs, I’m glad it exists. Thanks to Grande’s honesty, thoughtfulness, and gift for storytelling, it, too, can serve as a trail of breadcrumbs for young readers and writers seeking books that reflect their lives.

Gretchen Lida is an essayist and an equestrian. Her work has appeared in the Washington Post, Brevity, the Rumpus, the Los Angeles Review of Books, and many other publications. She is also a contributor to Book Riot. She teaches composition in Illinois, lives in Chicago, sometimes resides on Nantucket, and is still a Colorado native.