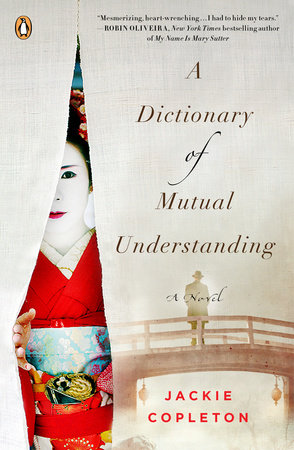 In her debut novel, A Dictionary of Mutual Understanding, Jackie Copleton doesn’t shy away from difficult subjects. The story, focused on the atomic bombing of Nagasaki, details the catastrophic casualties and ramifications of the event that ended World War II. Against this historical backdrop, Copleton writes of Amaterasu Takahashi, a mother, wife, and grandmother whose actions just before the bomb drops become impossible to live with afterward.

Amaterasu is the sole survivor of her family. During the war, her son-in-law dies fighting for Japan. The bombing of Nagasaki kills her grandson and daughter. After moving to America, her husband passes away. She now lives a quiet life alone with her deceased daughter’s journals and the ghosts of her family.

Then, one day, a scarred and disfigured man knocks on her door, claiming to be her grandson. He tells a complicated story of being found by someone from Amaterasu’s past — Sato, a lover who’d scorned her and then bedded her daughter, Yuko. Amaterasu struggles with whether this supposed grandson’s appearance is Sato’s final revenge or an act of contrition.

Upon the young man’s arrival back in her life, Amaterasu cannot accept that he is her grandson; the idea offers comfort she does not feel she deserves. “My grandson was too pure for any world that would keep me alive but claim my daughter. Only scavengers and liars and cheats survived. The best of us died young back then.”

Copleton starts each chapter with a passage from a dictionary Amaterasu’s husband gave her to help her learn about her new home, providing the reader with slices of Japan’s culture juxtaposed against that of America. The first chapter details shame, a basic tenant of Japanese culture, contrasted with America’s focus on guilt. Amaterasu wrestles with both as she straddles the two cultures.

Thematically, death is no stranger to novels. But rarely has it been as sudden and far-reaching as when delivered via an H-bomb. Many victims of Hiroshima and Nagasaki were never found, giving survivors no sense of closure. Imagine trying to say goodbye to a loved one whose ashes have become part of the dirt.

That fateful morning, Amaterasu had asked Yuko to meet her; Yuko was pregnant with Sato’s child, and Amaterasu demanded she abort it. Had Amaterasu not compelled her daughter to end the pregnancy, Yuko wouldn’t have been near the blast site and might have survived.

What mother wouldn’t give her own life for that of her child? Unfortunately, Amaterasu was never offered that option. Instead, she is forced to live in a world without Yuko; it’s a shell of an existence full of self-recrimination. “Death’s greatest cruelty is to claim the wrong people,” thinks Amaterasu. “Sometimes the weakest live.”

When to stop mourning and start living again is a question with no answer, and it’s one that leaves Amaterasu wandering in despair and solitude. As readers, we can only hope to benefit from her insights along the journey.

A veteran journalist’s first novel honors the venerable Paris Herald, though perhaps with a surfeit of voices.