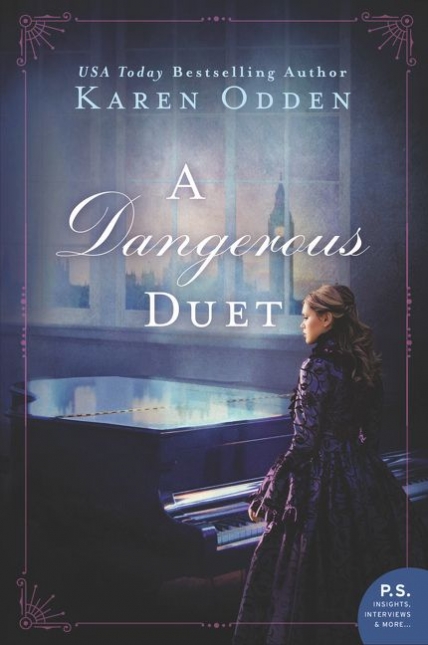 At 19, Nell Hallam longs to become a concert pianist. But she can only realize her dream of attending London’s Royal Academy if she can earn the fee to attend. And in 19th-century London, that is almost impossible for a woman. Unless…

Nell devises a plan. She pretends to be a man and secures the job of a piano player at the Octavian music hall in a tawdry part of London. She hates to keep such a secret from her brother, Matthew, an inspector at Scotland Yard, but it’s the only way to make her dream come true. She knows she’s putting herself in danger, walking the menacing streets of London every night, but if Matthew never finds out, at least she won’t cause him worry.

How can Nell know there is an even greater danger lurking?

As she continues her ruse as pianist Ed Nell, she realizes two people have guessed her secret — Jack Drummond, the music hall owner’s son, and Stephen Gagnon, the violinist hired as one of the acts. And it seems the two men already know one another — each warns Nell against the other. She’s not sure whom to trust, who’s telling the truth. It turns out that neither is who he appears.

Another obstacle in Nell’s journey is that her mother suffered from “circular madness,” the 1851 term for bipolar disorder, and left the family to pursue her career as a pianist. Now Nell’s love of the piano and her fervent practice worry her brother and Dr. Everett, the family friend who’d once treated her mother.

They fear Nell’s passion for playing will cause her own descent into mental illness. But how can Nell suffer the same fate when the piano provides the “keys to [her] happiness, all eighty-eight of them.” Nell believes her impassioned playing is not a violent threat to her sanity but magnificent.

As Nell’s audition at the Royal Academy nears, Matthew investigates a city-wide thievery ring that will rock London when exposed. Nell is soon shocked to realize she's surrounded by one of the crime cells.

As Nell’s attraction to Jack Drummond grows, she discovers they are both in danger. Can she keep Jack safe and still remain loyal to her brother?

A Dangerous Duet explores gender bias in the 19th century and the plight of talented women who were restricted from pursuing their passion. A strict code of behavior set by a society of men bound women to an appropriate future. Nell Hallam is the embodiment of every woman who did what was necessary to pursue her dream regardless of impropriety or danger.

The novel also examines the issue of genetics versus environment, and what “anchors a person’s character.” Which illnesses, passions, and talents are “bred in the bone,” and what might change the course of inherited traits?

Loyalties are also a focal point of the story. What happens when the plight of two people you love oppose each other? I found myself in the middle of Nell’s dilemma, rooting for her to make the ethical decision but unsure of what that was.

Reading about a young woman courageous enough to pursue her passion in an era of misogyny and restriction made me thankful for how far women have come, even knowing how far we have yet to go. A Dangerous Duet is a lyrical tune whose words demand equality and justice.