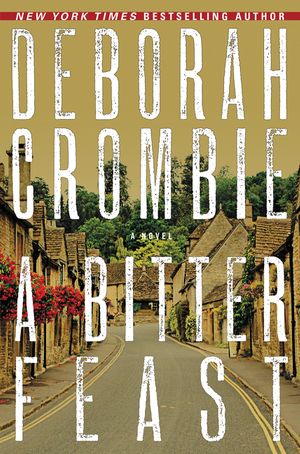 There are two types of readers who will come to this review of Deborah Crombie’s A Bitter Feast. The first is those who have read the first 17 installments of her Duncan Kincaid/Gemma James detective series and preordered A Bitter Feast long before its release date.

These readers will be looking to make certain the reviewer loves the books as much as they do and, failing to detect the appropriate degree of devotion, will dismiss him as a wanker for not understanding Crombie’s brilliance.

The second type of reader who comes to this review is looking to discover new titles and authors. To you, Crombie fledglings, I encourage a deep dive into A Bitter Feast, even if detective fiction isn’t your typical fare. A feast awaits, and it’s hardly a bitter one.

In the story, husband and wife Kincaid and James are invited to a weekend getaway, kids included, at an estate outside of London. But before Kincaid can join his spouse at the retreat, he is involved in a terrible car accident on his way through a small town.

Although left with a possible head injury (personal-injury attorneys, rejoice), he survives the accident, but the two occupants of the other vehicle are not so fortunate. With Crombie, accidents are rarely unrelated to the overall plot, and it’s no different here. This becomes evident when the police start to probe the circumstances of the crash.

As the local inspector, Booth, investigates (with ample help from Kincaid and James), it’s discovered that the passenger of the other car, a patron of the local pub, was dead before the collision occurred. Less than 24 hours later, the barkeep at the same pub is struck down while walking home after work.

In such a sleepy town, two deaths in under a day is unfathomable.

As the narrative unfurls, Crombie trots out a likeable cast of characters who, at first blush, seem incapable of murder. That, of course, is by design — and distinctly British. (Perhaps it’s the accents that free them from initial assumptions of guilt?) Like all good suspense writers, the author soon offers small nuggets casting doubt on each character’s saintliness.

The teetotaling driver of the smashed vehicle, for instance, endured a nasty divorce from a prominent physician years prior. The barkeep came from London with the pub’s owner and seems willing to do most anything for her. And the pub owner herself faces an ugly custody battle with an ex she wishes would, well, vanish.

One of the joys in reading Crombie is relishing the witty details in the hunt for clues, such as here, when Kincaid and Booth search the hotel room of a victim:

“Looking round the room, he saw that the bed had been turned down by housekeeping, but not slept in. A partially open duffel bag sat on the bench at the foot of the bed, and one of the bedside tables held a dog-eared paperback thriller.

“‘Somehow I’d have expected better literary taste,’ Booth commented. ‘Something on food, or at least an Irish noir detective novel.’”

Ouch. Foodie tomes or Irish noir are superior to paperback thrillers? (All of the Kincaid/James books are available in paperback.) Suffice it to surmise that Crombie has suffered her share of slings and arrows aimed at her genre. Fortunately, she can deflect those barbs by trotting out her Dreaming of the Bones, which was a New York Times Book of the Year in 1997.

In a larger context, though, detective fiction is often perceived as beach reading. But to dismiss Crombie or detective fiction as anything less than literature obscures the fact that literature can be entertaining despite what you may have been forced to endure in middle-school English. (What self-respecting seventh-grader would sell a pocket watch to buy hair combs — or even know what those items are?)

No watches appear in A Bitter Feast, but with much of the action taking place in and around a country pub, there are plot thickeners and soup thickeners. The place provides an idyllic, innocent setting far removed from the competitive London restaurant scene and its cutthroat drive for Michelin ratings. Still, as one of Gemma’s police friends notes, “Trust you to run smack into one, if not two, possible murders.”

Even on holiday, Kincaid and James end up in a sticky wicket (to use the British vernacular that abounds in these pages), and Crombie fans old and new will rejoice.