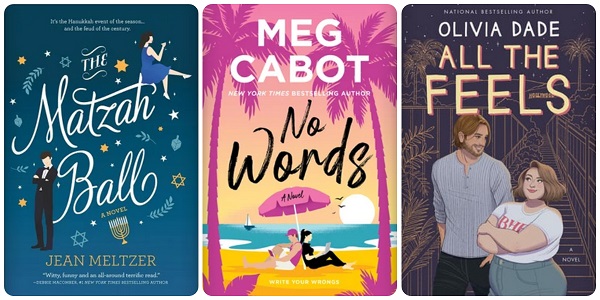 I feel like I spent the entirety of summer wishing for autumn and then blinked and — poof! — now I’m trying to keep up as we careen from one holiday activity to the next! But before I’m knee-deep in Thanksgiving prep, I want to take a moment to reflect on everything I’m thankful for this year, including all the wonderful authors whose books keep me turning pages late into the night. Here are a few of my favorite romance reads this month.

The Matzah Ball (MIRA), Jean Meltzer’s first novel, is a heartwarming love story about a romance writer finding her own happy ever after.

The daughter of a rabbi, Rachel Rubenstein-Goldblatt has been keeping a secret from her Jewish family: She loves Christmas. Like, really loves it. In fact, she writes swoon-worthy, Hallmark Movie-style Christmas romances under a pen name. But now her publisher wants her to write a romance about Chanukah — a holiday she doesn’t consider the least bit romantic — and she doesn’t know where to start.

Unexpected inspiration comes from Rachel’s first crush, Jacob Goldberg, from long-ago summer sleepaway camp. Jacob’s company is hosting an exclusive party for Chanukah, and Rachel thinks an invite will be just what she needs to jumpstart her creativity.

Despite the fact that she hasn’t forgiven Jacob for breaking her heart, Rachel throws herself into volunteering for the ball. Of course, she never expected her old feelings for him to come bubbling to the surface, but there’s no denying the mutual attraction between them. But can they build an adult relationship from the ashes of a failed teen romance?

This clever and endearing enemies-to-lovers comedy captures the magic of the holiday season and gives readers a peek into the life of a novelist. Meltzer does an excellent job of creating believable characters with full (and sometimes messy) lives and gives Rachel and Jacob a delightful supporting cast to cheer for them. Complex issues, like Rachel’s conflicted feelings about religion and the challenges she faces living with chronic fatigue syndrome, are handled with honesty and care, making The Matzah Ball a sparkling and memorable debut.

Continuing the theme, No Words (William Morrow) by Meg Cabot is also a story about a writer falling in love — this time, with another writer!

Little Bridge Island in the Florida Keys is holding its inaugural literary festival, and children’s author Jo Wright has been offered first-class travel and accommodations, as well as a sizable stipend, to attend. Unfortunately, Jo’s nemesis, Will Price (known for killing off the love interests in his wildly popular novels), lives in the Keys.

Jo has no intention of going anywhere near Will, but when her agent insists he is out of the country and won’t be in attendance, she relents. Having missed the deadline on her latest book, she’s battling writer’s block and needs the cash. Plus, a tropical vacation with some of her author buddies wouldn’t be the worst thing in the world.

Of course, Will does show up at the festival. In fact, he’s responsible for financing it and has gone to great lengths to make sure Jo attends. The source of her animosity toward Will is a careless and insulting comment he made during an interview about the popular series she writes, Kitty Katz, Kitten Sitter. Jo harbors a not-so-secret desire to confront the arrogant author until his earnest apology takes the wind out of her revenge-seeking sails. But now that she doesn’t hate him, she’s starting to realize she might just be falling for him…
Fans of Cabot’s Little Bridge series will enjoy revisiting the island and its quirky characters in this slow-burn romance, but new readers will have no problem getting immersed in the tropical setting.

Olivia Dade follows up her charming Spoiler Alert with All the Feels (Avon), a heartfelt tale about self-image, authenticity, and opposites attracting.

Handsome, sexy actor Alex Woodroe stars as Cupid in the fantasy TV series “God of the Gates.” He’s currently filming the final season and is not at all happy with his character’s story arc — or with the show’s bumbling producer. When his anger leads to a bar fight, former ER therapist Lauren Clegg is brought in and tasked with keeping an eye on the impulsive Alex — and keeping him out of trouble — until the series can finish filming.

Babysitting a spoiled (if sometimes sweet) actor isn’t the job Lauren had in mind for herself, but it seems like a piece of cake compared to her previous work. Despite her preconceived notions about Alex (and his about her), she soon learns there’s more to the volatile performer than meets the eye.

His successful career aside, Alex struggles with his own troubled past and finds unexpected empathy and support in Lauren. The two soon discover they actually like each other, and an attraction develops between them. But when another scandal hits the show, and Lauren loses her job, they’ll have to sort out the issues that brought them to this point if they have any hope of a future together.

Outgoing Alex and thoughtful Lauren bring out the best in each other, and it’s a joy to watch their relationship evolve and their true personalities and feelings shine through. Dade does a terrific job of handling issues of body image and self-worth, and this second book in her Spoiler Alert series works as a lovely standalone story.