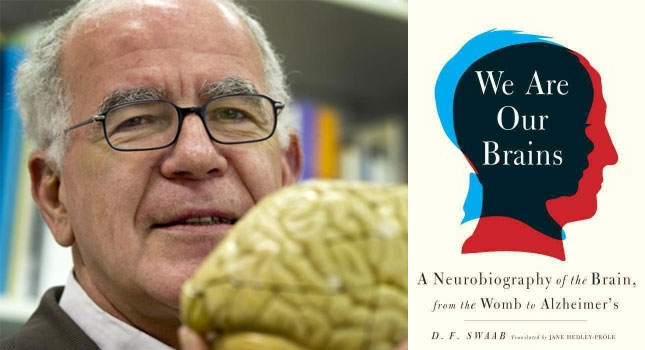 D.F. Swaab has written a biography of the brain from birth to dotage and it is fascinating throughout. During childbirth, mother and baby are already communicating. The baby’s role in his or her own delivery is as crucial as the mothers. Disruptions to this process can be regarded as the first symptoms of malfunctioning brain development. The teen brain is uncontrollable and an anesthetic is like a dose of near-lethal poison to an old brain.

Q&A with D.F. Swaab on We Are Our Brains

Oxytocin is the chemical responsible for warm feelings and bonding between mother and child or family members. At the same time, it inhibits the stress axis, and we learn that it is also responsible for aggression toward others and peace toward one’s own kind. It would seem that if folks were properly dosed, they might be better off. But I suspect that though we can identify the chemical and perhaps synthesize it, we cannot guarantee that the brain would absorb and use it in the way that it uses its own naturally manufactured oxytocin, or in the way that a particular experiment might be designed. Would you say that the brain is a most unreliable subject?

The brain is not unreliable, just complex. Giving a chemical from the outside is indeed different from how the brain does it in the natural way: a little bit released in the right brain area in a certain context. Yet, there are positive findings with the administration of oxytocin, e.g., in autism.

Can we ever recover from in-utero happenstance, i.e., babies who were starved - 95 percent spend their adulthood with a hankering for fatty foods and process fat differently? Babies who have differing chemical reactions are homosexual or eventually different in some other fashion. Is the cause always or only survival? Do the particular set of chemicals in the mother and baby’s brain combine purposefully or haphazardly for cause?

Babies in the womb react in a way that gives, for a short time, a better chance for survival, but with a risk for long-term side effects. A baby who is starved in the womb because the placenta does not work properly sets its brain systems such that all calories are kept in its body. When he will later live in an environment with enough food, the same mechanism leads easily to obesity.

What would be the purpose of seemingly arbitrary variation unless humans are an evolving system? Does the fact that there are so many variables, possibilities, prove that humans are still evolving and for cause?

Indeed, the enormous variation in all our functions (e.g. hetero-, homo-, bi-, and transsexuality) has been the motor of our evolution. Although there are good reasons to believe that the evolution of our brain will not proceed, the variability will always remain.

I know only one person who can live without his hypothalamus. That is because his mother is constantly taking over all functions (temperature regulation, food and water intake, pills with hormones at the right moment of the day, etc.). She is his external hypothalamus. He will never be able to reproduce, though.

In another recently published book, Smart Change, the claim is that one must tame one’s brain, that the brain works for us and we not only can but should control it, your book seems to take the opposite view. We supposedly value our individuality and creativity but truthfully we are a high functioning species with entirely built-in systems of behavior. Would you also say it is true that we learn more about ourselves through deviant rather than expected behavior?

With a lot of effort, we can change a bit of our behavior. We cannot, however, change our character. This is inborn. A person can learn how to better deal with his personality disorder. He cannot become a different person.

Even ovulation surreptitiously controls us. At this time, women dress more suggestively, etc. Is this autonomic? If so, shouldn’t women make better choices of mates? Love shouldn’t then be crazy but programmed? Why is it so hard for so many to get it right?

Partner choice is an unconscious process of the brain. We experience suddenly that we fall in love. It is amazing that the choice is quite often a correct one for the rest of our life. The brain has indeed calculated many factors involved in an autonomic, unconscious process.

Orgasms can be seen in the brain, but how do you explain the sex with no orgasms if orgasms are supposed to be experienced for the good of mankind? How would sex appear in the brain if an orgasm isn’t being experienced?

Orgasm is the reward for fertilization. This coupling is so successful that there are now 7 billion people walking around. If we would not have gotten this reward, we would have been extinct.

The brain produces its own opiates and cannabinoids. In the book, you relate the brain, and its production of cannabis, to schizophrenia. With legalized marijuana and more use, are we looking at an increase in the number of schizophrenics?

Marijuana may indeed trigger the first symptoms of schizophrenia. It is, however, not the cause of this disorder. The cause is 80% genetic and, for the rest, early developmental. So the cause of schizophrenia is already there for a long time before one takes marijuana.

Just because we dream and our higher visual centers are activated, how do you know we exhibit characteristics of psychiatric and neurological disorders? Is the advance to violence while sleeping possible simply because it has happened or somehow programmed? Isn’t it hard to imagine that in our most restful state we are prone to violence? Is the amygdala always active in our dreams?

We can dream that we do terrible things to other people. There is at the same time activity in all brain areas. The only reason that we do not execute those things is that we have at the same time a loss of muscle tone. So we cannot move during our dreams. In those rare cases where the muscle can function during dreaming, it may become really dangerous.

Our best and properly secured memories are generally traumatic. Are we also hard-wired for negativity, fear, shock, and sorrow for survival?

Yes, for survival it is crucial that we remember dangerous and unpleasant things very well, so that we can immediately react to them when they occur again. This mechanism has a strong evolutionary advantage.

I love the relationship that you set out between mountaineers and prophets. And their stories are all too similar to seem coincidental. How has the religious community reacted?

Yes, when you are thinking about important things in solitude, the solution may occur as a hallucination that gives the impression that it comes from outside, so from God. I think it does not make the performance of Moses smaller if the Ten Commandments came from his own brain.

Mutations cause the rapid evolutionary strides or changes in mankind? Humans are simply the product of many mutations?

Yes, random mutations and the best adaptations to the changes in the environment made us human. That is the mechanism of evolution.

If we don’t have free will, why aren’t we all religious?

The
answer is again: variation between people. On the basis of small genetic
differences we have a variable amount of spirituality. Some people have strong
spiritual feelings and fill it easily in with the local religion. Others have
very little of such feelings and do not become religious. The important
consequence is that we have to respect the enormous variation between our
brains, and give each individual the freedom to live according to the way his
brain has developed, as long as he does not do too much harm to others. The
state should guarantee this freedom.