An Interview with Alex Poppe

The writer talks Iraq, female autonomy, and the hypnotic power of flamenco. 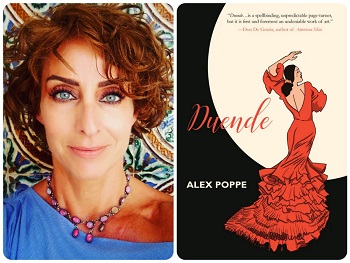 Alex Poppe’s books often consider the point of view of the outsider. Her stories are fueled by real-life instances of injustice and human despair, and her main characters are women trying to understand the world and their place in it. Duende, Poppe’s new novella, is set in Seville, Spain, and Detroit. The story dances intensely between these very different places and cultures.

Poppe herself is a world traveler who recently worked as an academic-writing lecturer at the American University of Iraq and as a trainer for Iraq’s Ministry of Higher Education. Like many of her characters, Poppe understands what it is to try to make a home away from home and to live in a world that is both brutal and beautiful.

Duende, your haunting novella, is set against the rich backdrop of Seville, where your 16-year-old narrator, Lava, was sent during a tumultuous time in her life. You know what it’s like to be an American in Spain from your own travels. What drew you to this setting?

Flamenco. I was captivated by the dancers’ sense of control within a forcefield of movement. The first dancer I saw whipped her skirt behind her like a swashbuckling tail before she arched her back at a seemingly impossible angle. She held the pose, her diaphragm opening and closing like heart ventricles. There was a tightrope of tension in the stillness before her feet exploded, stamping a propulsive, frenetic rhythm into the floor, creating a wall of sound.

I love the sense of communion within a flamenco performance. The performers listen to one another with their eyes and ears, speaking back and forth using the language of flamenco. (Its steps and rhythmic phrasing function as words.) There is also the conversation between the performers and the audience, which can approach the primordial and is evanescent.

When I began this story, I had my main character, Lava, but the story was set in Detroit, and I was toying with it as an urban dystopian thriller. Then, I went to my first Andalucian feria. I saw my friend’s mother dancing las sevillanas with her cousin, whom she hadn’t seen for decades due to Franco’s reign. In a flash, and with the logic of dreams, I saw them as young women dancing in a space resembling the upstairs foyer of my grandmother’s townhouse near Chicago. I knew I would write Lava’s way to Seville.

Joy and release in this story often come from Lava’s engagement with flamenco. You’ve researched the dance form but don’t claim to be a dancer yourself. Given that, how did you enter into the emotional and physical momentum of Lava’s dancing?

Dancing for me is a release. I tapped into that emotional truth as a launching point to write. To build an expressive dance vocabulary, I studied flamenco dancers’ work: Sara Baras and Rocío Molina in particular. I did research in flamenco museums and cultural centers throughout Andalucía, and I went to a lot of performances, where I’d surreptitiously take notes in the dark. Back at my desk writing, I’d connect emotionally to the truth of the scene and write. I’d bounce back and forth between video performances of flamenco and the scene I was crafting until what I saw in my mind’s eye was on the page.

Lava is a tough though damaged young woman. In your previous books, one will find this kind of vulnerable, often mistreated female character. What about this character in general, and Lava specifically, interests you as a writer?

Thinking about my work, tough, damaged, vulnerable female characters center it. I am interested in how we become who we end up being. How experiences, whether traumatic or privileged, shape us. After we break, how do we heal? I don’t think we return to our pre-broken state; there are scars.

Society doesn’t necessarily take care of young women — sexual assault goes unpunished, female sports are underfunded, and we are losing autonomy over our bodies with reproductive-healthcare legislation. In Duende, the case of the missing girls, the sense of women as prey, lies in the periphery of the reader’s attention as in Lava’s: deliberately, as a comment on how women need to take care of themselves in societies that fundamentally devalue them.

During the last few years, you lived in Iraq. Am I wrong to assume that Iraq is a conservative, patriarchal society? Did you sometimes feel powerless there? And if yes, did this feeling feed your understanding and rendering of Lava?

Iraq is patriarchal, but show me a society that isn’t. As a white, foreign woman, I existed in a social class higher than that of a local woman but not as high as a local man, and certainly not as high as a western man, so feelings of powerlessness were not as intense as they could have been. I am not consciously aware of my experiences in Iraq influencing Duende. Rather, thoughts on motherhood, a fascination with gitano culture, a yearning to find a place to belong, and a deep love for Seville fueled Duende’s mood.

Now that you’re back in the States, what are you working on?

Right now, I am working on a memoir-through-essay of my time in Iraq and the West Bank. Reoccurring themes include sexual violence, motherhood, female subversion, privilege, displacement, ego, and resilience. I also weave in the topography of northern Iraq, its various cultural groups, Kurdish politics, and a commentary on international education. Very little of this connects to being in my home country, but perhaps being here provides the distance to write about Iraq.

An Interview with JS Lee

The author talks social justice, transracial adoption, and her latest novel, Everyone Was Falling.