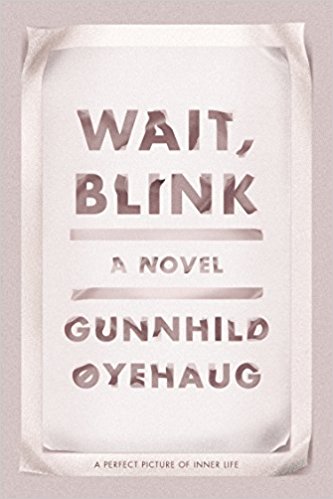 Early in Gunnhild Øyehaug's novel Wait, Blink, her character Sigrid observes that if she were to make a movie, "It would be exclusively about a girl who sat in her room, and about what happened to her there, what she thought about, and how she went over to the skylight and looked out at the twin spires of Saint Mary's church, and longed for something greater than life itself…"

Wisely, Øyehaug refuses to let Sigrid have her way in this narrative. Instead, she bundles her protagonist up in armor of mismatched green woolens and scoots her out of the house to a nearby lookout point. This is, of course, where all "desperately sad" 23-year-old literature students end up when they fear they're fated to "wander the earth all alone."

It would be embarrassing if it weren't so tender and, yes, funny: Picture dear Sigrid clinging to a flimsy iron railing, eyes closed, recalling lines from Dante's The Divine Comedy ("through me you pass into eternal pain," no less!).

But it isn't until we're edging toward writing off altogether this unhappy, quixotic creature that Øyehaug stages a nearly impossible trick of coincidence and reels us back in. From this point on, we're seduced into Sigrid's world –– idealism and romance and terrible poetry and all –– so that when reality coldly presents itself at the end of the novel, we're surprised to find ourselves longing to remain in her sad, ridiculous dream.

Subtitled "A Perfect Picture of Inner Life," the novel doesn't just bewitch readers into Sigrid's interiority. Along with her young, literature-loving hero, Øyehaug lures us into the minds of a sundry cast of supporting characters, each of them tangled up in their own questionable enchantments, and all connected with the finest of gossamer threads.

There is Linnea, a 27-year-old filmmaker who, in an echo of the 1957 movie “An Affair to Remember,” fantasizes about reuniting with an old flame on a scheduled date in the future. In Øyehaug's version, however, it's not the Empire State Building where they plan to rendezvous, but at a local museum's Egyptian collection, where two preserved mummies lie under glass.

There is Viggo, who loses a gold crown in a bicycle accident as he hurries to his grandmother's funeral. When the tooth falls into a gutter and makes its way out to sea, it's swallowed by a salmon, where it nests in its belly for 10 long years, until at last fish and tooth are caught by a teenage girl on the very day she is reading The Divine Comedy.

But perhaps the most fascinating characters in Wait, Blink are the narrators. Known simply as "we" for the bulk of the novel, their identities cloaked until the end, Øyehaug's all-knowing storytellers steer readers from episode to episode, confiding secrets, tossing off multiple allusions, and referring to the novel itself in a fitting postmodern move that Sigrid would happily inform us dates back to Don Quixote.

Earlier, another move appears to interrogate Sigrid's identity. Here she is gazing into the dim light of her computer screen:

If Øyehaug is acknowledging that Sigrid the character is being written before us, is being conjured both as we read her and as she reads herself –– is that inherently more artificial than the realism we as readers have come to expect from contemporary literary fiction, or is it somehow more real? Øyehaug never presents an answer to this puzzle, or any puzzle really. In Wait, Blink, it's the wonderfully confounding riddles we happen upon that become the draw.

By the time we discover who these narrators are, we already feel a peculiar sense of intimacy with them, perhaps because of Øyehaug's savvy deployment of that uncanny "we" pronoun, or perhaps because, as with any skillful storyteller, readers develop a kinship with them, despite never having met. Even so, there's a shivery thrill when the discovery is made that these haunting narrators truly are familiar –– though not in the way one might expect.

Though worthy, this gothic collection “is more cabinet of curiosities than haunted house.”