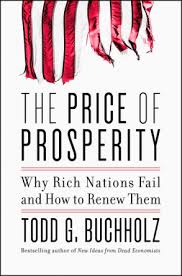 Patriotism and national pride are explosive issues in the era of Donald Trump and Brexit, but economist Todd Buchholz argues that a nation cannot prosper without them. He has issued “the Patriotist Manifesto,” proclaiming that pride in one’s country is a good thing.

The author is an economist, hedge-fund manager, inventor, White House adviser, author, and co-producer of “The Jersey Boys.” His earlier books defended free trade and predicted instability in the European Union. The Price of Prosperity: Why Rich Nations Fail and How to Renew Them addresses the problem of national economic decline.

Buchholz fears that the American dream is dying. “Our national symbol should be the splinter,” he says, because “the United States no longer coheres.” To knit the nation together, we must renew “the sentiments of loyalty and patriotism in a disparate collection of people.” Neither Donald Trump, nor his slogan, “Make America Great Again,” are mentioned, but they are examples of the trends that Buchholz identifies.

Prosperity creates unique problems, says Buchholz. In the U.S., birthrates are falling, people work less and borrow more, and bureaucracy stifles initiative. All true. But if these were our only problems, we would still be better off than Japan, where “more adult diapers are sold than child diapers,” and France, where most workers are employed by the government and work only 35 hours per week.

If the nation is divided, it is for two main reasons: trade and immigration. “Workers feel threatened by a combination of foreign machines and foreign people,” says the author. But restricting trade is not an option, because “nations cannot grow rich without trading.” The debate on immigration, therefore, is key for Buchholz.

The central thesis of The Price of Prosperity is that falling birthrates require rich nations to accept immigrants. But immigrants can “splinter the dominant culture” unless the nation’s civic and cultural institutions are strong enough to assimilate them. Buchholz believes that our national institutions are lacking.

This is a difficult argument to make in the face of four centuries of American immigration. Call us a melting pot, a salad bowl, the land of liberty, or the home of slavery, no one can dispute that immigration is a core element of this nation’s DNA. And we have a long history of surmounting the tensions and strife caused by racial, ethnic, and linguistic diversity.

But Buchholz is not convinced. He complains that immigrants today speak little English, live in ethnic enclaves, follow ethnic media, lack diversity (too many Hispanics?), and return occasionally to their homelands. Because similar statements were made about Italian, Jewish, and Chinese immigrants in the 19th century, Buchholz struggles to distinguish that era from our own.

The low point of this exercise comes during a discussion of America’s national character. Borrowing, in part, from author Angela Duckworth, Buchholz says that Americans traditionally display “Grit, Mobility, and Confidence.” So far, so good. But the author finds more grit among immigrants today than among young Americans. Foreigners “come by train, truck and ship” to perform manual labor, he says, while our youth are slackers. “For every Mark Zuckerberg in his dorm room, thousands of young men in hoodies are sitting on a sofa in their mom’s basement, bravely chasing avatars in World of Warcraft.”

The book then shifts focus. Immigration today has its dark side — illegals, drug wars, sanctuary cities, terrorism, Trump and anti-Trump rallies — but they are not discussed. Instead, we read about foreign leaders who guided their nations through bloody periods of war and national renewal. We learn, for example, that Alexander the Great conquered a multicultural empire, Kemal Ataturk created modern Turkey, and the Meiji in Japan destroyed the Samurai.

One might suspect that Buchholz foresees a major war in the Middle East or the collapse of the European Union — but no. He simply wants to teach lessons about leadership, such as great leaders should “kick aside conventional wisdom” and make people feel “pride in their country.”

The author recommends policies to reduce unemployment in the U.S. and control the national debt, but his most controversial proposal is the Patriotist Manifesto. A “patriotist” is defined as a patriot who believes it is a “good thing” to be patriotic. The manifesto is “a call and a code to guide people who believe that their nation’s very existence brings about more liberty and justice in the world.” It opposes “cultural incursions that would destroy the character of the nation,” and requires immigrants “to understand and embrace” the nation’s history.

An important debate has begun about the role of nationalism in a globalized economy. Europeans are searching for ways to combat rising separatism in the wake of Britain’s vote to leave the E.U. And in the U.S., former Obama adviser Larry Summers has proposed a trade policy of “responsible nationalism” to avoid “more populist demagogues contending for high office.”

But The Price of Prosperity is a flawed contribution to this debate. It is an odd mix of economic analysis, sociology, selective history, and political polemic leading to the provocative conclusion that the world needs more patriotism and nationalism. The author’s tone is upbeat, but his analysis of our current ills is grim, and his proposed remedy is vague and unsettling, particularly as presented in the Patriotist Manifesto. Patriotism is a noble sentiment, but it can be misused. Buchholz fails to explain the difference.

Bob Clark is a lawyer and teacher who lives in Bethesda, MD.