The Life of the World to Come: A Novel

This debut novel is "chock-full of heart and humor and a dose of sadness." 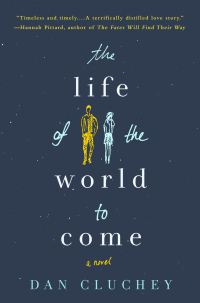 I wanted to read The Life of the World to Come when I learned that the author, Dan Cluchey, was a former Obama Administration speechwriter and advisor. Cluchey wrote hundreds of speeches and op-eds on behalf of senior leaders throughout the administration, and I'd be lying if I said that I didn't want to know what kind of novel an Obama speechwriter could pen. Turns out, a pretty good one.

This debut, chock-full of heart and humor and a dose of sadness, makes a promise to the reader that it is about actors and lawyers and the triumph of sincerity over fantasy. It traffics in heartbreak at every turn, but Cluchey avoids wallowing by delving deeply into what happens after the heart is broken, how to pick the pieces up and attempt to make oneself whole again.

Indeed, The Life of the World to Come is a heady novel, contemporary in every way. Cluchey’s sentences are rhythmic, verbally acrobatic, and fun to read. They swept me away early and carried me buoyantly to the end.

At its heart, the novel succeeds in holding the big questions of what it means to live, love, and die firmly within the thoughts of the protagonist, Leo Brice. He is a neurotic law student who meets his romantic match in Fiona Haeberle, a woman he believes destiny has hand-picked for him. Opposites attract, as Fiona, an aspiring soap star, is wildly impulsive. The two fall quickly in love. The future, Leo believes, is theirs.

Early on, Leo tells the reader, “So it is: like every story, this story begins with the creation of the universe and ends in death. And if it doesn’t, that’s only because this story is not, in truth, over.” This proclamation serves as both a warning and a glimpse into Leo’s fluid ideas about what is in front of him, uncertain as he is about the future.

Leo and Fiona navigate their twenties in love and with little regard for the outside world. They are happy in a solar system of their own design, and they orbit each other until the gravitational pull of Los Angeles and another man lure Fiona west. When she leaves, Leo is crestfallen, “blown open” as he says, and forced to grapple with the future he is left to face as a junior death-row advocate at the New Salem Institute, a nonprofit advocacy organization that provides legal support to condemned inmates.

To say that Fiona leaves at the worst possible time is an understatement. After spending much of the second half of the year she left him sifting through relational artifacts, Leo immerses himself in the esoteric world of his client, a born-again Georgia inmate named Michael Tiegs. We’re in capable hands here, as Cluchey is a graduate of Harvard Law School and has the chops to dive into the minutiae of legal procedure. Cluchey’s narrative camouflage in these sections is good dialogue and sprawling internal debate as Leo unpacks his id and bounces it off of Michael.

Michael is a man equally consumed with the burning questions of the afterlife, an inmate who has exhausted all other avenues of legal recourse and whose very fate hangs in the balance. This is fertile ground for the novel, but it can also be a bit constricting.

If the novel has a fault, it is that we don't get as much story mileage out of Leo and Michael together, as a pair, even as they spend a lot of time dealing with big concerns. Leo is the supernova here, which casts Michael as a foil. And I wanted Michael to be a more fully rounded character, more than the sum of his death-row parts.

There is good storytelling here, but I wanted this narrative strand to hold more weight, to ferry more emotional concern, to ballast the breakup narrative between Leo and Fiona, yet the two threads never fully braid together. But this is a small gripe to have with a novel that spends so much time being exactly what it set out to be: a very personal story set against the backdrop of death-row advocacy.

If we’ve learned anything from Leo, it’s that there are no real answers even as the questions never seem to fade into the background. And we have to be okay with that.

Blake Kimzey teaches creative writing at the University of Texas at Dallas. His fiction has been broadcast on NPR and published by Tin House, McSweeney’s, Redivider, and Green Mountains Review, and was selected by Pulitzer Prize-winner Robert Olen Butler for inclusion in The Best Small Fictions 2015 anthology.

The Study of Animal Languages