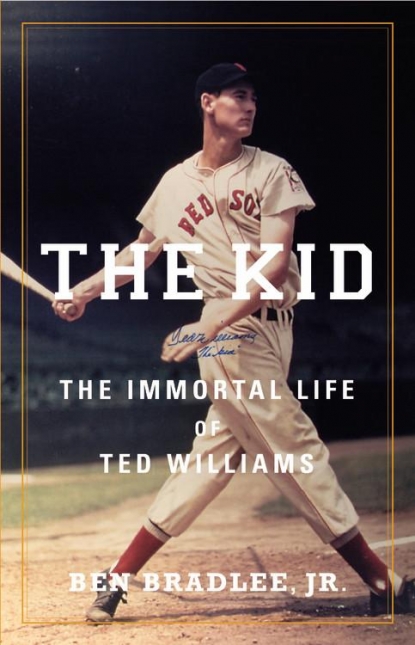 It took John Updike just five work days and a few thousand words to capture the essence of Ted Williams in his 1960 piece for the New Yorker, “Hub Fans Bid Kid Adieu,“a tour de force that includes the most famous line associated with either man, explaining why, as he circled the bases after hitting a home run in his final at-bat at Fenway Park, Williams refused to tip his cap, or take a curtain call — a bit of hubris modern ballplayers succumb to on a daily basis — or acknowledge the cheering, beseeching masses in any way.

“Gods do not answer letters.”

Ben Bradlee, Jr., a longtime editor at the Boston Globe, has allowed himself considerably more time — it took 10 years to produce The Kid — and room to tell the story of an irascible genius who spends five years of his baseball prime as a Marine pilot in World War II and Korea, and much of the rest of his life telling acquaintances and strangers where to get off, and teaching them to like it.

Like Updike, Bradlee comes to his examination of Williams from the perspective of a longtime admirer. But that hardly makes them outliers. No less a baseball star than Mickey Mantle, who topped Williams in more than one MVP vote, is so awestruck on the occasion of their meeting at an All-Star Game that he’s unable to speak. Sometime later, Mantle makes what can only be described as a pilgrimage to Williams’ off-season home in the Florida Keys, only to turn around and drive away, afraid at the last moment to ring the doorbell, lest he intrude on Williams’ privacy.

For those closer to him … wives, children, friends and teammates, and the Boston newspapermen with whom he famously feuded … life with the great slugger is even more daunting, requiring thick skin and the ability to write off Ted’s mood swings and volcanic rages — one of his daughters suggests he must have been mentally ill — as “Ted being Ted.”

Unlike most of Williams’ previous biographers, who tend to stick to the rich baseball adventures of the last man to hit .400, Bradlee delves deeply into the private life the player tried so desperately to keep, well, private. The Kid spares none of the cringe-worthy details, from the story (make that a couple of stories) of the night the young slugger loses his virginity, to his final days and beyond, when his offspring conspire to freeze his body and store it in a warehouse in the Arizona desert.

There’s plenty of baseball lore here, of the sort that leaves Mantle awestruck. One morsel: Just back from Korea, where he walked away from a fiery belly-landing in his shot-up jet, Williams stops at Fenway to see Red Sox owner Tom Yawkey, and is persuaded to take a few swings. After not touching a bat for over a year, he rips a few tentative drives into the outfield, then launches the next 12 or 13 pitches — who thinks to keep count at a time like this? — into the cheap seats, before walking away with his un-calloused hands dripping blood, and his teammates shaking their heads.

But like Jane Leavy in The Last Boy, her revealing biography of Mantle, Bradlee paints a picture of a complicated and vulnerable star who in this case always seems to be running from the shame of his impoverished childhood and his heritage — who knew Ted Williams was Mexican? — even as he chases an improbable goal: to become the greatest hitter of all time. When a young teammate wonders why he’s so obsessive, Williams responds with stinging candor. “Because I’ve got to be good every day,” the Kid tells the kid. “You don’t have to be.”

The irony, of course, is that even as he realizes his own impossible dreams — he’s not only the best hitter on the planet, but acknowledged as one of the best fishermen and best pilots — he seems destined to be disappointed by the world around him.

It’s hard not to feel for Bradlee’s flawed hero, and not just because he hits a lot of home runs, or because he prefers the company of cops, TV repairmen and fishing guides to the politicians and dilettantes who vie for his attention.

As distant as he sometimes is with his own progeny, the big guy demonstrates a soft spot for kids, and not just when he lends his name to the Jimmy Fund for children’s cancer research. More than once, he charters a private plane to visit a sick or dying kid between games, often leaving his number with doctors or nurses for the next time they think he might be able to help, and setting only one condition: that his generosity go unreported. When a young boy refuses to let go of his famous visitor’s hand, Williams pulls a cot close to the kid’s bed and they fall asleep like that, still holding hands.

Like the fans who only want permission to adore him, Williams and the Boston sportswriters are caught in a dance of mutual dependence. For as long as he plays  — indeed, as long as he lives  — Williams remains the biggest story in Boston. The writers need him, need him even when it means suffering his tantrums or his scorn, to remain relevant.

And for his part, Williams reads every word, lingers over every slight, real or perceived, and uses his anger as fuel for even more prodigious batting feats.

In the end, any one of the Boston writers, like Updike or Bradlee, might’ve borrowed from the written sentiments of John Gillooly of The Record, who on the eve of Williams’ last game at Fenway laments the prospect of life without the Kid. His column the next morning comes in the form of his own mock-retirement letter.

“The song has ended,” Gillooly writes. “He was our Hemingway.

“Oh, the stories he has written for us.”

Would that they ended there.

The realization that Bradlee has made us care about his subject only makes the account of Williams’ final days  — when he puts his trust in the son who has his name (and trades on it) but neither his talent nor his soul  — harder to read.

Baseball gods may not answer letters, but they grow old and enfeebled and vulnerable, just like the rest of us. And it isn’t always pretty.

Jay Price, a longtime columnist for the Staten Island Advance, is the author of Thanksgiving 1959. He lives in Manasquan, NJ, and is working on a book about the town’s experiences in the days after Hurricane Sandy.

Arnie: The Life of Arnold Palmer