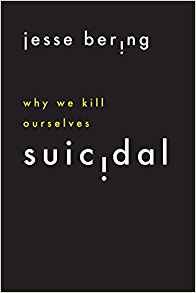 Jesse Bering’s Suicidal opens on a woodsy, bucolic landscape: a “copse of dappled shadows, birds, and well-worn deer tracks” behind his former house in Upstate New York. The author’s gaze lingers on one stately oak tree, “built by a century of sun and dampness and frost, its hardened veins criss-crossing on the forest floor.”

The lyrical description is then immediately undercut: “It was the perfect place, I thought, to hang myself.”

This jarring introduction signals that the reader will be in the company of a darkly humorous, irreverent guide to the science and psychology of suicide. But the passage also establishes Bering’s personal connection to the subject matter. Bering has come by his “deadpan” humor honestly.

Bering is no stranger to provocative subject matter. He has authored books that challenge pre-conceived notions of sexual deviance (Perv: The Sexual Deviant in All of Us), argue for the evolutionary basis of religious faith (The Belief Instinct), and generally embrace taboo topics related to evolution and human behavior (Why Is the Penis Shaped Like That? And Other Reflections on Being Human).

What’s remarkable is that Suicidal mostly succeeds in walking that line. Bering, trained as a psychologist, offers readers a fascinating amalgam of disciplinary knowledge and diverse source material. He draws on research studies from evolutionary psychology and animal behavior, along with interviews, historical records, and literary accounts.

Sensationalistic newspaper articles on animal suicide — like a 1913 Washington Post piece on a bulldog who allegedly jumped, with cheerless intention, into a hippo tank at the Central Park Zoo — are presented alongside the latest neuroscience on VENs. (The latter, by the way, are a class of spindle-shaped neurons involved in processing negative emotions like shame and self-criticism; they have been found in greater densities in the brains of suicide victims than in those of the control group.)

Suicidal excels at extracting this type of juicy, intriguing detail from a range of fields and artifacts. I learned that, as a profession, veterinarians experience one of the highest rates of suicide. That the bumblebee, when infected by a parasite called a conopid fly, which implants its young inside the victim, abandons its colony to die alone, thus saving its non-infected kin.

Aside from Bering’s recollections of his own suicidal thoughts, the book’s emotional core, and its structural center, is the story of “Vic,” a 17-year-old New Zealander residing in Singapore at the time of her death. Bering quotes extensively from Vic’s journal, which was discovered several months after her suicide, to give readers a more qualitative, personal account of the stages of suicidal thinking. Vic’s journal serves as a counterpoint to the big-picture, metaphysical questions Bering explores elsewhere, grounding them in a moving portrait of a brilliant but troubled teenage mind.

The author’s eclectic, stylized approach doesn’t always work. Some passages intended as humorous come off as rambling instead. For instance, Bering devotes over two pages to an anecdote about a bungled and increasingly macabre attempt to murder a field mouse that found its way into his pantry. He frames the story as an attempt to give the reader “a bit of a breather from such heavy material,” but it felt (to this reader, at least) like a pointless and unfunny digression.

Tone-wise, there are more serious missteps. Bering sometimes relishes clever wordplay at the expense of human feeling. In a chapter on how the media affects suicide rates and methods, he recounts the live-streamed suicide of a 21-year-old Swedish college student named Marcus. Just before hanging himself, Marcus had typed “all right, let’s do it.”

Bering follows this quote with a sentence that echoes Marcus’s language: “And, tragically, he does.” Coming soon after the sympathetic account of Vic’s struggle, Bering’s terse announcement of this young person’s death telegraphs as, well, cold.

According to Bering, researching this book enabled him to come to terms with his own suicidal tendencies. He expresses the hope that his work might help those contemplating suicide to gain some perspective, or grieving families to attain a better understanding of their loved one’s mindset.

Yet I hesitate to recommend this book to readers who have been affected by suicide in such an intimate way. Because Bering approaches the topic with detachment and occasional levity, Suicidal seems to better suit curious onlookers, or at least readers who have a healthy distance from suicidal thoughts or events.

Still, Suicidal is an original, if flawed, contribution to our often-simplistic popular narratives about killing oneself. Its value lies in acknowledging readers’ latent curiosity about suicide, while also bringing nuance — and a surprising measure of playfulness — to such a charged and solemn subject.