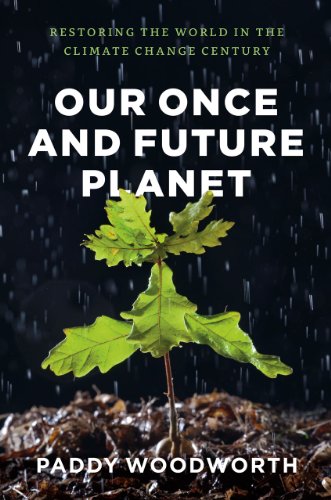 Only corn stubble and a manure-packed chicken coop welcomed the Leopold family to their new farm in 1935. But pioneering ecologist Aldo Leopold set their shovels to singing, planting hundreds, then thousands, of pine seedlings to start repairing their personal remnant of original Wisconsin. Lessons of hope and action took root, too; Leopold’s children and grandchildren have carried on restoring that Sand County farm and other damaged landscapes ever since. And when a great-grandchild thought of buying a pristine plot of native woods and wildlife, her young son objected, saying, “What would we do?”

Veteran journalist Paddy Woodworth at first seems an unlikely writer to examine the science and practice of restoration ecology. His acclaimed first book, Dirty War, Clean Hands, analyzes the Spanish government’s use of death squads to combat Basque separatist terrorism. Woodworth admits he was looking for a more “congenial” topic, when witnessing a failed prairie burn sparked his imagination. He was raised to think that saving nature meant erecting fences around wild places to keep people out, but realized that, by reviving native grasslands, people could work actively to reverse environmental loss.

Eight years of meticulous research, insightful interviews and world travels later, Woodworth has produced Our Once and Future Planet: Restoring the World in the Climate Change Century. In engaging and spirited prose, he deploys his finest investigative skills to address the book’s central question: “how successfully can we restore degraded ecosystems, and our own damaged relationship to the environment?” Ecologists, environmentalists and others who care about a sustainable earth will be intrigued by the answers he discovers — and the new questions that arise.

The author stumbles a bit at the outset. Beginning his quest in Wisconsin, Woodworth recognizes Aldo Leopold’s seminal work at the University of Wisconsin Arboretum, established in 1934 to reconstruct pre-settlement ecological conditions as a standard for future research. But the author oversimplifies Leopold’s views, lumping him with strict preservationists who dichotomize human-nature relationships and idealize virgin wilderness. Though a Wilderness Society founder, Leopold emerged from the Progressive Era conservation movement. He focused most of his professional energies on inventing ways for farmers, hunters and average citizens to live on the land without diminishing it. Woodward neglects Leopold’s and his contemporaries’ efforts to reclaim damaged rangelands, reverse erosion on farms and enrich game bird populations, thus missing the chance to explore historical shifts in definitions of “restoration” and early, edifying successes and failures.

Woodworth examines modern restoration efforts more nimbly. From a Wisconsin crane sanctuary, he flies to the South African fynbos and on to forests in Costa Rica, Mexico, New Zealand and the Windy City, in each spot interviewing ecologists, volunteers and other key players to identify basic goals and potential roadblocks for the project. Landscape descriptions feel most intimate in Woodworth’s native Ireland. Seamus Heaney stanzas and images of storied woods and boglands dramatize the cultural as well as ecological values at stake in every restoration.

Yet the depictions of Chicago’s urban woodlands are as vivid and feature one of the book’s brashest characters. An anti-war activist in the 1960s, Steve Packard charmed an army of volunteers in the 1980s to tackle invasive European buckthorn that was choking out Cook County’s native savannah. By 1994, some 4,000 amateur restorationists had hacked, girdled and poisoned alien plants on over 25,000 acres of public land. But as the project grew, so did opposition. Some questioned Packard’s methods, others rejected his aesthetics, still others just liked buckthorn. As Woodworth puts it, “One person’s patch of invasive alien is another’s long-cherished grove.” Mistrust escalated to hostility in ways that reminded Woodworth of the Basque Country. The resulting government-imposed moratorium on restoration is an object lesson that a fundamental step in such efforts is public engagement. In contrast, invasive species removals in New Zealand meet less resistance, even when mammals are killed. There, notes Woodworth, leaders recognize “that one of the vital roles of restoration projects is the building of citizen awareness and practical activism.”

Woodworth’s wide travels reveal many sources of contention in restoration work — poor communication, clashing ideologies, limited resources and uncertain science. Individual conflicts enliven the stories, effectively balancing the more abstract, theoretical passages. But a more ominous threat darkens all these earnest endeavors: global climate change. How can ecosystems be restored when future conditions will little resemble the past? If climate trends continue, says Woodworth, restorationists may be “rearranging blocks of seminatural real estate on the deck of planet Titanic, their backs to the coming iceberg.” Even here, Woodworth uncovers innovative thinkers determined to wrest a more livable tomorrow from the gloomy predictions. James Aronson and others insist that restorationists must move beyond futile attempts at recreating historic ecological communities. The focus instead should be on reinstating ecosystem goods and services, or natural capital, that we all depend on. Says Aronson, “Restoration of natural capital — RNC — is the next big thing.”

Throughout this peripatetic volume, Paddy Woodworth seeks to instill hope in his readers. Says Woodworth, “There is nothing inevitable about humanity’s current starring role as the Bad Guy of Planet Earth.” The people he interviews, even more than the places they strive to restore, may inspire others to transcend their forebodings. Whether university professors or shovel-wielding teens, restorationists embody not just a hope but a will for a better world. Not everyone can plant 50,000 pines like the Leopold family. But after reading Our Once and Future Planet, many will want to pick up their shovels and do what they can.

A fascinating saga of the twists and turns of ever-evolving racial identity in our culture.