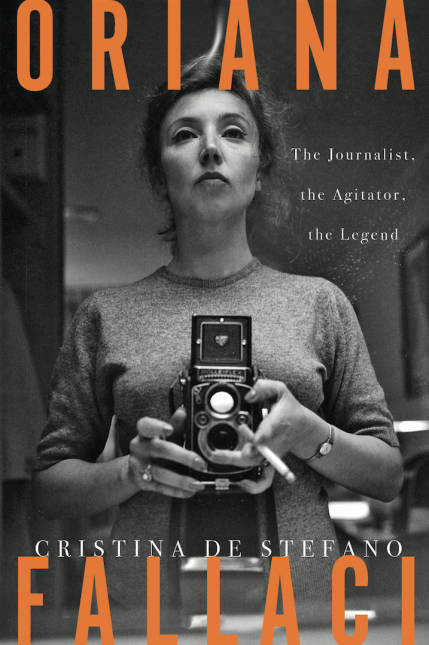 In Cristina De Stefano's Oriana Fallaci, the stories about Italy’s most controversial journalist have the power to stun as they race forward, one more astonishing than the next. Fallaci was shot. She ripped off a traditional chador she was wearing during an interview with Ayatollah Khomeini, calling it a "stupid, medieval rag." And once, Orson Welles jumped into a pool with her.

The book offers a way for American readers to get to know the brilliant, contradictory "La Fallaci," as some called her. Today, with journalism on the front lines of the political and culture wars, it’s a good time to take pause and learn from Fallaci's life and work.

Oriana Fallaci is translated from Italian, which seems fitting for its polyglot subject. It's an interview of a book, giving the subject plenty of time and adding very little analysis or introspection. As De Stefano writes about one of Fallaci's first interviews, "Even at this early stage, her intuition and interpretative skill lie at the heart of the interview, leading her interlocutor in a predetermined direction. There is no escape."

De Stefano's book gallops along in present tense, appropriate for the packed, hectic life she's describing. There are episodes — like Fallaci's time in Hollywood — that have a who's-who of the mid-20th-century quality. Elvis Presley wouldn't see Fallaci, so she described him as an idiot. She liked Jayne Mansfield, though.

Oriana Fallaci has plenty of Italian atmosphere, too, from Cinzaninos at the bar to how Fallaci shocked one of her first bosses by using the familiar pronoun instead of the formal one.

In 1968, Fallaci was shot during a protest in Mexico. "She is carried away unconscious and left in a filthy room filled with injured and dying protesters lying on the floor in puddles of blood. Every so often she wakes up and tries to explain that she is an Italian journalist and that the embassy should be informed."

Richard Nixon was not happy when Henry Kissinger told Fallaci Nixon was a "cowboy who leads the wagon train by riding ahead alone on his horse." Kissinger tried to deny he'd said that, according to De Stefano, but Fallaci had a recording, and the scandal stuck around.

De Stefano handles Fallaci's turbulent personal side with care. Fallaci frightened an early lover with her intensity and devotion to him, and there were disastrous ends to some of her future affairs. When she finished with someone, she cut them off entirely. De Stefano reveals that sometimes the obsessiveness that propelled Fallaci to such intense reporting could be hurtful in the personal realm.

There are smaller, telling moments here, too. Fallaci called herself an atheist, citing an experience as a child when she left some chocolate and a banana on a church altar, and later found a nun eating her banana. After that, she said she never asked God for help.

Fallaci weighed 92 pounds, De Stefano writes, and stood 5-foot-1. "She often jokes, 'When people meet me, they're surprised by how little there is of me. I just spread my arms and say, 'That's all there is!'"

In De Stefano's retelling, though, Fallaci is not just bold and eccentric, although her more outrageous statements are enjoyable. De Stefano has a terrific ear for Fallaci's most piquant quotes. "You appear to have some sort of complex, Commander," she once said to astronaut Alan Shepherd, "The 'first man' complex."

De Stefano also emphasizes Fallaci's versatility as a writer confronting difficult topics. A novel, Letter to a Child Never Born, was published in 1975 and sold half a million copies in six months. She had written it as a short story after her second miscarriage in 1966 and then, later, turned it into a book.

After the September 11th attacks, Fallaci wrote polemical works that made incendiary statements about Islam, and De Stefano carefully signposts earlier experiences for readers who are wondering where on earth all of that came from.

As early as 1960, Fallaci wrote, "The first thought a Western woman has when she arrives in a rigorously Muslim country like Pakistan is that she appears to be the only woman to have survived a tsunami that has washed away all the others." But by this time, she is issuing diatribes, "She has become the caricature many people believe her to be: aggressive, intractable," writes De Stefano.

Interestingly, in an afterword, De Stefano writes that she chose not to interview any Italian journalists as she researched the book. And she notes that "some sources unknown to me will come forward. Oriana's story does not end here."

This open-handed comment sums up the spirit of the book: headlong and direct, all the while maintaining an understanding of a reporter's commitment to asking hard questions.

Eliza McGraw is the author of Here Comes Exterminator! which is about the 1918 Kentucky Derby winner. She lives in Washington, DC.

A gripping account of the everyday uncertainty experienced by an alarm-sounding diplomat and his family in 1930s Germany.