A haunting story of Myanmar's fraught, bloody past. 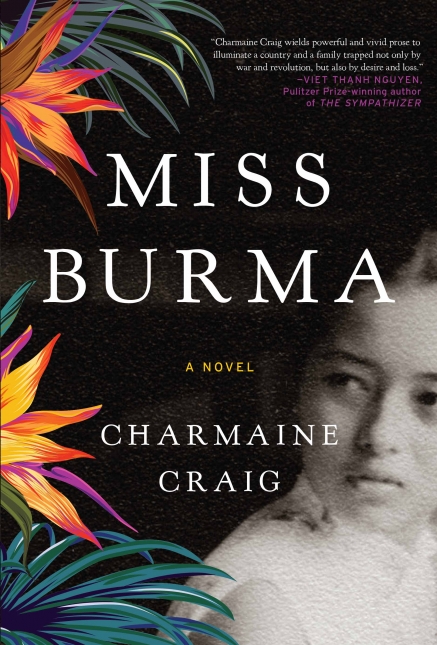 With Miss Burma, Charmaine Craig accomplishes something many historical novelists do not: the successful depiction of great sweeps of momentous events along with intimate scenes that linger over the most minor, evocative details.

The novel, which is based on things that happened to the author's own family, is set in the WWII-and-beyond years in Burma (now Myanmar), when ethnicity, gender, and history combine to chart a challenging and portentous future for the locals.

With her war-and-peace, past-and-future concerns, Craig writes about ethnicity with an encompassing eye. The novel includes a focus on a long-persecuted ethnic group called the Karens. Khin, a Karen woman, finds herself in the center of a pattern of desire and responsibility.

"She must only find a way for her family to endure," writes Craig. "And as she followed the Karens, who had begun to wander down the darkening mountain again (doomed, as all Karens were, to wander and wander), she moved swiftly through the gnarled landscape with a feeling of unburdening herself of her load."

The echo of what has been — "as all Karens were" — mingles with Khin's own imperative to persist, for her family, in the present. This tension permeates the book as characters must grapple with identities set in motion long before they ever take their own place as actors.

War, hunger, jail, coups, bubonic plague: Adversity stalks Craig's characters. She never shrinks from depicting their suffering, but they remain wholly human throughout each trial. Craig also melds large emotional issues into minor moments: "A kind of wickedness had thwarted his love of honesty and turned her honest protestations into something as wounding as gunfire," she writes of one pair.

The language of violence is never far from how the people in Miss Burma frame their world. Unease permeates their lives so much so that no one is able to be creative or thoughtful without some attention given to remaining alive. This tension guides the novel's action, as characters swing between keeping themselves and those they love physically protected, and forcing themselves to consider the ramifications of the forces so violently forming their lives.

About that violence: There are some unsparing passages in the novel, and knowing that they’re based on fact makes reading them that much more harrowing. No one is safe. In its descriptions of the physical damage that we're capable of inflicting on one another, Miss Burma becomes a rumination on the larger implications of moments when power is in question, and how war harms and shapes nations citizen by citizen.

The youngest can find themselves at risk, too. One of the novel's strengths is that the children are well realized. They're never precious caricatures, but solid people in their own right. Their understanding of the world around them affects how they grow and their ability to navigate the challenges that face them. It's these children, in many ways, who most give Miss Burma its urgency and pace.

"Louisa had never spied on adults before," Craig writes. "She had listened, and she had looked, all her senses attuned to the signals they put on, signals she kept recorded somewhere deep inside."

In passages like this, readers feel the ways in which the turbulent era affects its youngest. Shaped by events that often seem unreasoned or undeserved, the children record all "somewhere deep inside," and have to grapple with decoding the signals they receive from their parents and the world.

The most outstanding of these children is Louisa, who becomes Miss Burma, a symbol of a country moving resolutely forward. How does she balance fame with her fraught childhood? Often, stories as deeply rooted in history as this one become mired in it. But not Miss Burma. As extraordinary as Louisa — who becomes the face of her country’s future — this novel expertly chronicles a people’s resolve and the metamorphosis of a complicated land.

Eliza McGraw is author of Here Comes Exterminator! which is about the 1918 Kentucky Derby winner.

What happens when a white guy feels like he’s Black?