This compelling tale — with a touch of mystery and the emotional weight of memoir — explores sexuality, guilt, and the boundaries of self. 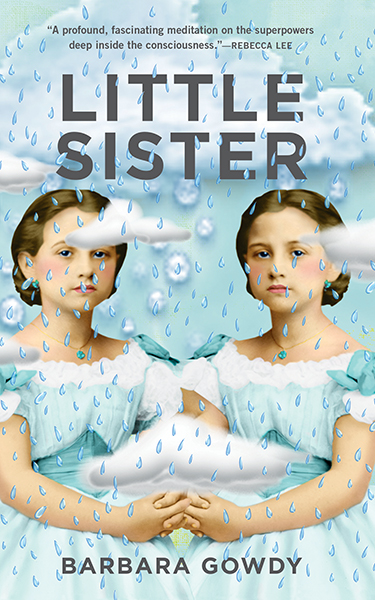 With Little Sister, Gowdy adds to her track record of heavy subjects by addressing the power of the human mind, the bonds of women through both sisterhood and motherhood, the agony of dementia, and the pain of regret and guilt. Her writing is subtly humorous, her characters are likable, and the unfolding of the central mystery is compelling.

Rose Bowan, the main character in Gowdy’s ambitious seventh novel, is 34 years old and firmly stuck. Her life has been exactly the same for years, following a strict schedule: late-night sex after work with her boyfriend, Victor, a meteorologist for Environment Canada, on Tuesdays and Fridays; dinner (but never sex) with Victor on Mondays and Wednesdays; and Sundays spent on brunch and a movie with Victor, unless he decides to work on one of the two books he has been writing since she has known him. Rose has most of Saturdays to herself, until the family business — an ancient theater that only shows old movies — opens in the evening.

Rose has been faking her orgasms with Victor for several years, something she has done with other lovers, as well. At one point, she wonders if “faking your orgasm [is] an act of generosity or of selfishness” and if frigidity is “a source of power for her or a shrine to her everlasting guilt” (more on this guilt later).

Rose seems to be dating Victor, who is 10 years older than she, solely out of habit. He despises children, and declares them “drooling, incontinent lunatics,” which disturbs Rose, who is infertile but doesn’t share his hatred.

This unlikely couple’s plans to move in together have been abandoned — Victor is “devoted to his writing, and Rose to keeping the theater afloat.” Rose’s mother, Fiona, a widow descending into dementia, lives with Rose, who feels bound to care for her as the only child remaining.

Rose is haunted by the childhood death of her only sibling, her little sister, Ava. She feels responsible for the death and often wonders if she deserves her life when Ava is dead. When Rose is diagnosed with fibroids, she opts for a hysterectomy although it isn’t strictly necessary, because “she’d been expecting something like this since the day Ava died. A big reckoning, a penance.”

In a metaphysical miracle, Rose begins having an impossible reaction to thunderstorms — shortly after storms begin, her consciousness suddenly leaps into the body of another woman, Harriet Smith. These “episodes,” as Rose terms them, begin on the third page of Little Sister, thereby informing the whole book.

The reader never fully experiences Rose’s boring life, instead getting short glimpses in between exciting ventures into Harriet’s body. Rose cannot control Harriet’s body, but is merely a passenger of sorts: “a living Harriet suit, and I was lost in it.”

She watches as through Harriet’s eyes, and feels, through Harriet’s love affair, her first sexual excitement in years. As these episodes continue almost daily, Rose grows to depend on them, living her real life on auto as she plans for the next leap into Harriet’s more thrilling existence.

Beginning with the fourth episode, Rose grows “aware of herself, not as a glint on the edge of Harriet’s consciousness but as a separate consciousness, a fully integrated component.”

Rose feels more fragmented as the episodes continue: “If she knew herself lately it was only by virtue of knowing she wasn’t Harriet.” Rose begins changing with this new influence, taking up smoking because she enjoys it while in Harriet, and beginning to enjoy sex with Victor — as long as she keeps her eyes closed and imagines Harriet’s lover.

The majority of the book takes place over the course of a week — June 29 to July 4, 2005. There are also flashbacks to Rose and Ava’s childhood in the early 1980s, which alternate with the present time. These flashbacks unscramble the mystery, leading the reader to finally discover, near the end of the novel, how and why Ava died.

Through the flashbacks, readers also discover Rose’s childhood disgust and fear concerning sex, which is spurred by the arrival of Gordon, a new handyman about whom Rose invents thrilling and maniacal fictions for Ava.

A scene when Ava innocently sits on the ground in Gordon’s presence is telling: “‘It’s dirty there!’ Rose cried. She saw obscenity in the splay of her sister’s legs. Thunder roared, real thunder.” This early mention of thunder is a clue to the possible cause of Rose’s leaps of consciousness, and the relation the episodes might have to Harriet and Ava.

Gowdy makes an interesting narrative choice by never including Harriet’s point of view except through Rose’s filtering of it. The reader never knows what Harriet is doing when Rose is not inside her, nor if Harriet feels strange when thunderstorms begin, as Rose does.

In fact, the entire book is filtered through Rose — we get her idea of what Fiona, Victor, Gordon, and Ava are thinking — but it seems odd that Harriet is a side character, because we know her actual emotions from Rose experiencing them.

While Rose cannot hear Harriet’s thoughts while inside her, she clearly feels her disappointment or pleasure. In the end, led by her experiences inside Harriet, Rose discovers deeper empathy for her fellow humans and a greater understanding of forgiveness.

Sarah Broussard Weaver lives in the Pacific Northwest and is a voracious reader. Her essays have been published in the Nervous Breakdown, Hippocampus, Full Grown People, and Literary Mama, among other journals.