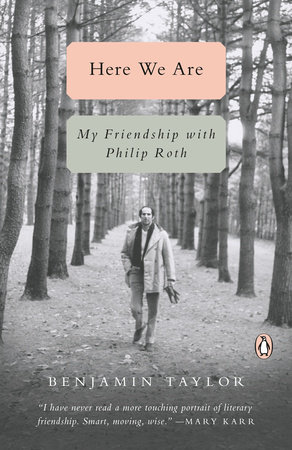 Philip Roth is one of the giants of American literature of the past 60 years. His name joins the ranks of Saul Bellow, John Updike, Eudora Welty, Norman Mailer, and Joyce Carol Oates — all of whom, except Oates, predeceased him. In Here We Are: My Friendship with Philip Roth, Benjamin Taylor presents his version of the great novelist.

Roth had early triumphs with his collection Goodbye, Columbus, the title novella of which became a successful movie, and his sex-obsessed Portnoy’s Complaint. But unlike so many writers, he produced his best work late in his career. This included his American trilogy (American Pastoral, I Married a Communist, and The Human Stain) and the “Nemeses” tetralogy of short novels (Everyman, Indignation, The Humbling, and Nemesis).

These were linked by the common theme of the “unpredictable brutalities at large in the world and the illusoriness of ever being safe from them.” An adaptation of Roth’s brilliant alternate-history novel, The Plot Against America, is currently airing on HBO.

Still, the author’s career was not without controversy. He was frequently criticized for the prurient content of his books, and some detractors accused him of being a self-loathing Jew, a charge he considered unfounded and hurtful. In 2014, he received an honorary degree from the Jewish Theological Society, of which he said, “I welcomed the honor. Who takes Jews more seriously than the J.T.S., and what writer takes Jews more seriously than I do?”

On the personal front, Roth’s infidelities and affairs were legion and often grist for the gossip mill. They led to accusations of misogyny, which he resented. “No punishment is too harsh,” he told Taylor, “for the demiurge who thought up fidelity.” He was known to hold a grudge and remained bitter about his two ex-wives his entire life. His first wife died in a traffic crash; he referred to the driver as “his emancipator.”

Roth longed to be selected for the Nobel Prize for Literature, an award he came to call the “Anyone-But-Roth Prize.” Taylor tried to ease the recurring disappointment with a list of great writers who also had been passed over by the Nobel committee: Henry James, Leo Tolstoy, Marcel Proust, and others, but October — the time when the nominees were announced each year — became, for Roth, “the cruelest month.”

Taylor recalls these anecdotes and more in his slender memoir of friendship with Roth. Near the end of his life, Roth summed up their relationship: “We’ve laughed so hard. Maybe write a book about our friendship.”

The pair were best friends during the last two decades of Roth’s life; their connection “was as plotless as friendship ought to be.” Although they first met in 1995, they did not become close until 2001, when they began their frequent lunches and dinners together.

Taylor spent many days at Roth’s Connecticut and New York homes, and he lovingly recalls these times, along with his and Roth’s rambling discussions. Their relationship was one of deep intimacy in which they could, and often did, discuss anything, including literature, family, anxieties, gossip, and sex.

Shortly before he died, Roth told Taylor, “I have been to see the great enemy, and walked around him, and talked to him, and he is not to be feared. I promise.” These words are eloquent, offer comfort to his dear friend, and address the single issue — mortality — that is ultimately of concern to us all and is the catalyst for all great art, which the best of Roth’s books surely is.

In Here We Are, Taylor has crafted a heartwarming portrayal of his friendship with Roth that is clear-eyed and largely unsentimental. He writes that Roth often used to say, “Two things await me, death and my biographer. I don’t know which is to be more feared.” Taylor’s memoir provides little Roth need have feared.

Terry Zobeck received a Ph.D. in anthropology from the University of Tennessee. He is a substance-abuse researcher and policy and budget analyst with the federal government. In his off hours, he is an avid book and music collector. He is also the author of A Trawl Among the Shelves: Lawrence Block Bibliography, 1958-2020.