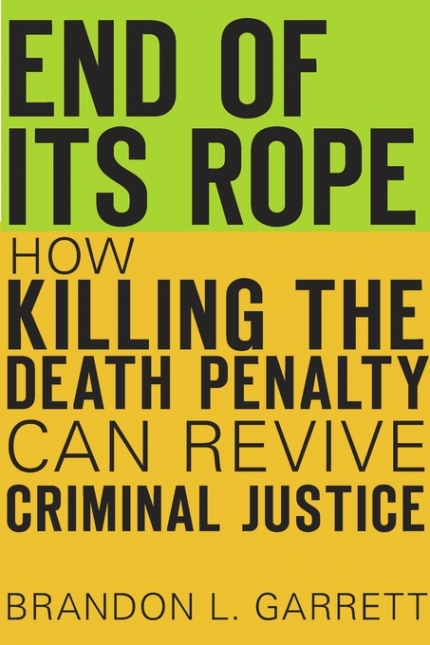 The Supreme Court abolished capital punishment in the United States in 1972, but then allowed it to rise from the dead four years later as long as prosecutors, judges, and juries followed new rules designed to come closer to "equal justice under law."

Four decades later, the death penalty is in decline but continues to be just as arbitrary and discriminatory as the "lightning strike" that Justice Potter Stewart referenced in his concurring opinion in the 1972 decision.

With the failure of the judicially imposed reforms more and more evident, the death penalty may well be at "the end of its rope," as Brandon L. Garrett puts it in the clever title of his thoroughly documented and carefully reasoned critique.

Unlike other death penalty opponents, however, the University of Virginia law professor expects it to end not with a Supreme Court bang, but a whimper born out of growing public and official discontent with a deeply flawed system. He also sees its inevitable demise as a launchpad for a broad reform of criminal justice to make the system fairer, more reliable, and more effective.

Numbers tell the story, according to Garrett, who notes that public support for the death penalty had dropped to 49 percent from the 70 percent or 80 percent levels registered in the 1990s according to a Pew Research Center poll in September 2016.

More significantly, prosecutors are filing fewer and fewer death penalty cases, and jurors in capital cases are less and less likely to impose the death penalty. The number of new death sentences in the United States has fallen steadily from the low 300s in the mid-1990s to only 31 in 2016. The number of executions has also fallen, somewhat unevenly but almost as precipitously, from the recent high of 98 in 1999 to only 20 in 2016. For 2017, the Death Penalty Information Center reports a slight uptick to 23 executions as of mid-November.

Multiple factors contribute to these trends, according to Garrett, and he applies statistical techniques to try to determine the relative importance of each. Intuitively, the decades-long decline in crime and homicide rates would seem likely to be a major factor. Yes, to some extent, Garrett finds, but death sentences have fallen much more rapidly.

The "great American death penalty decline," as Garrett calls it, has also taken place against the backdrop of the growing number of documented exonerations of previously convicted offenders, including more than 100 death row inmates.

Again, the "innocence effect" is a contributing factor, but with an asterisk. Some states, such as Illinois, abolished the death penalty with the risk of wrongful convictions foremost in mind. But Florida has retained the death penalty even though it leads all the states with over 40 exonerations in death-sentence cases.

The most important factor in the decline in Garrett's estimation is what he terms "the defense-lawyering effect." Garrett recalls the quip attributed to the anti-death penalty civil rights lawyer Stephen Bright that defendants sentenced to death are not the worst of the worst but they do have the worst of lawyers. Defense lawyering has improved greatly since the bad old days, Garrett reports, and the effects are "real" and "substantial."

Most specifically, the post-verdict capital sentencing hearing required under the Supreme Court's 1976 decision amounts to a whole venue for defendants and their lawyers. "It takes a team," Garrett writes — specifically, two lawyers, one investigator, and a "mitigation specialist." This defense team is charged with learning all there is to know about a defendant's background that some jurors might deem to be a mitigating factor weighing against imposition of the maximum punishment.

The strategy works, sometimes even in the worst of the worst cases. As one example, Garrett points to the Colorado jury that sentenced James Holmes to life imprisonment without parole (LWOP) for the Aurora movie theater shooting. Jurors heard expert psychiatric testimony that Holmes' schizophrenia rendered him unable to understand reality. The defense lawyer followed by invoking mercy for Holmes — not because it is deserved, she said, but "bestowed."

Garrett sees a "mercy dividend" in other cases of defendants spared the death penalty. He acknowledges that LWOP sentences give jurors an easy-to-choose alternative, but he also worries about the growing number of inmates serving what he calls "the other death" sentence — now, more than 200,000.

"We can abolish the death penalty," Garrett writes in his opening sentence. He points to weakening support for the death penalty even in a state such as Texas, which has accounted for more than one third of the 1,500-plus executions since 1976. The number of counties imposing death sentences has fallen drastically — from more than 500 in the late 1990s to only 27 in 2016. "Neither justice nor mercy should remain entirely local," Garrett asserts.

Prosecutors, judges, and jurors in those counties still see the death penalty as an important tool of criminal justice, whatever the evidence of the system's flaws. The down-trending graphs in Garrett's book illustrate what he calls "the near demise" of the death penalty. The vanishing point on those graphs may be tantalizingly close for death penalty opponents, but short of a Supreme Court edict the small handful of death penalty states appear unlikely to give it up.

The Monster’s Bones: The Discovery of T. Rex and How It Shook Our World

The rip-roaring race to put dinosaurs on display.