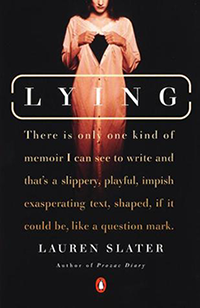 Lauren Slater proves this elegantly in her memoir Lying. It begins with the title itself: Lying – A Metaphorical Memoir. Not only are we tipped off that we will be on the shifty ground of “lying,” but the subtitle tells us that this memoir is a metaphor, namely one thing that stands for another.

Right from the beginning, Slater sets the stage; she’s up front with the reader: Don’t trust me, I’m lying.  Therein lies the rub: She tells us what she’s up to. James Frey didn’t.

What then makes us not dismiss her book as a tall tale? What keeps us engaged with her little girl narrator? First, there is her lucid and lyrical prose. Slater’s scenes are cinematic. They come alive; we can see them, and we believe them. Second, we are in on her thoughts – in one scene, the child narrator falls into a grave – and the reader buys it until the narrator reveals, on the next page, that she only imagined this. She makes us part of her daydream.

Don’t we all have daydreams that almost become a parallel reality? Slater takes us along on such a daydream, seamlessly, for if it’s a good daydream, we only realize afterwards, as we regain our grip on reality, that we were daydreaming. And isn’t good literature a recreation of experience?

Some of the scenes and stories in Lying have a fairy-tale quality to them, especially those of the nuns’ school for epileptic children. Readers may doubt whether this school really existed, just as some doubt the information that Napoleon was epileptic. And yet we go along with the tale, we want to believe it; I have yet to Google any of this information. So why don’t I Google it?

Because who would Google a fairy tale’s veracity? It is this very fairy-tale quality that makes us accept Slater’s stories and assertions, along with the fact that we are dealing with a child narrator. We grant a child narrator some leeway. Until children pass through the elementary grades, they are closer to the metaphysical world. They still believe in magic, and we probably all recall at least some of the magical concoctions we created and believed in our own childhoods. Slater’s skill lies in her ability to conjure that magical world, to make it as real as a daydream.

The passages in Lying that make us wonder (Is St. Christopher really the patron saint of epileptics?) are those told from the child narrator’s perspective, the one narrator to whom we are willing to give the benefit of the doubt. Mary Karr does something similar in The Liars’ Club. Again, notice the title of that memoir: We know from the beginning that we’re dealing with a bunch of liars, so we don’t take the tales the men share at the bar at face value, and when the child narrator later tells the story of a grizzly bear frolicking with her cubs right in front of the family’s bay window, the reader is left wondering: Really?

In Lying, it’s the adult narrator who provides reflection, and who supplies us with interesting intellectual considerations on what she learned from reading William James. We hear the adult narrator characterize her mother: “Her whole life she had fought to stay on the surface of things…” – obviously this is not the eight-year-old narrator analyzing her mother, but the adult daughter’s insight many years later. Mary Karr chose not to reflect on what the child narrator experienced, but she does step out of the narrative by flashing forward and conceding that hers is only one version of the story. More than once she says: “If my sister Lecia was telling the story…”

What then can we learn about truth in memoir from these memoirs that clearly play with lying, that feature unreliable narrators? The operative word here is “clearly.” Slater is up front with her reader; Karr is more tongue-in-cheek, but both honor the contract with the reader. By their very titles, we are signaled what we are into with Lying and The Liars’ Club. Slater even comes out and tells us, “Oh, I made that up,” right after seducing us with a believable daydream. She toys with the notion of what really happened and what didn’t, and she lets us know that she’s playing. We’re in on the game, although sometimes her narration is so beguiling that we forget it’s a game.

So, if you are going to make stuff up in memoir, let the reader know that you are. If you’re fibbing, do so from a child’s perspective. If you’re not using a child narrator, make it clear that the narrator is a shifty one who cannot be trusted. Following these rules, your readers will forgive you and might even come along for the ride.

In a country where cremation is mandatory, the narrator’s grandmother insists on a traditional burial and persuades his father to build a coffin, in this memoir of an ordinary Chinese family during Mao’s Cultural Revolution.

The Privilege of Teaching Memoir

When I mention that I teach memoir writing, I often get the reaction, “You must hear a lot of heavy stuff.” I do, and I feel I live a wider life because of it. But writing memoir is not about the heavy stuff. It’s about what the writer makes of the experience, and about shaping that experience into an engaging story....