Should incomplete works ever see the light of day? 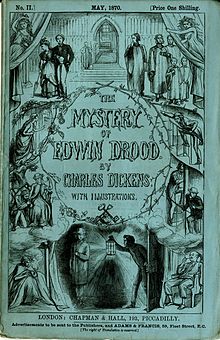 This past Christmas, some good friends gave me a present that I’ve only recently had time to enjoy. The Greatest Books You’ll Never Read: Unpublished Masterpieces by the World’s Greatest Writers looks at books and stories left unfinished or unpublished by writers — often because of death, but also for several other reasons: all of Hemingway’s earliest manuscripts, stolen from a train; John Updike’s early novel Willow, abandoned during his undergrad years at Harvard; and Junot Díaz’s Shadow of the Adept, one of two science fiction novels he’s tried to write but found too challenging — at least for now.

Many of the authors and works featured are from the highest ranks of literary fiction — Austen, Melville, Twain, Kafka, Plath, Nabokov, Vonnegut, and García Márquez — but a number of writers included here worked in my own chosen genre of crime fiction.

Charles Dickens’ Mystery of Edwin Drood fits both categories and is among the most famous unfinished novels of all time and one that readers and writers have been striving to solve ever since his death. Despite the subtitle of The Greatest Books You’ll Never Read, Edwin Drood isn’t actually “unpublished,” since you can get a copy of the book readily; it was just unfinished by its author.

And that’s the case with several other crime novels here. Raymond Chandler’s Poodle Springs, with only four short chapters finished at his death, was completed 30 years later by Robert B. Parker. Charles Ardai of Hard Case Crime personally polished up and then published James M. Cain’s The Cocktail Waitress, working from several different manuscripts.

And the Strand Magazine ran a contest to finish its serialization of Graham Greene’s early, never-completed The Empty Chair, a locked-room mystery in the style of Agatha Christie; the writing team behind Michael Stanley completed it to win a $500 prize.

And then there’s Stephen King’s The House on Value Street from 1977, inspired by the kidnapping of Patty Hearst. But you won’t read that one at all because…well, you’ll have to get this book to find out where that story goes.

Last week marked the first publication of the late Donald Westlake’s Forever and a Death, which he wrote in the mid-1990s, originally at the request of the producers of the James Bond films. (They eventually declined the story because of political complications in Southeast Asia.)

As a fan of both Westlake’s work and of the Bond books and films, I’m pretty excited about this novel, which seems like a great beach read (and, in fact, I’ll be reading it at the beach this week myself). And I’m also excited about the publication next month of Elizabeth Peters’ final Amelia Peabody novel, The Painted Queen, left partially written at Peters’ death but finished by her friend Joan Hess; Kirkus has already predicted that “Fans will cherish the legacy.”

But anticipating Westlake’s and Peters’/Hess’ books, and browsing through The Greatest Books You’ll Never Read has me thinking in another direction: As a writer, how would I feel about someone reading through or, worse, publishing the manuscripts from my youth or my notes for stories or some partially finished first draft? I certainly don’t anticipate anyone clamoring for stray scraps of my fiction (I have trouble enough selling the stories I do finish!), but at the same time…

There are plenty of those stray scraps around, for better or worse. I do occasionally start and finish a story start in a reasonable amount of time; for example, I had plans and purpose and momentum when I wrote “Parallel Play,” which won the Agatha Award recently and is now up for both an Anthony Award and a Thriller Award for Best Short Story.

But more often, I’ll write some scene that appears clear in my mind (not always the opening, I should stress), then maybe sketch out other scenes or make a few notes on character or plot, and then end up simply putting it to the side when I hit some plot turn I can’t figure out or when lesson prep or grading or whatever command too much of my time and attention.

Among my summer writing projects: completing several stories in various stages of being unfinished. But I’m a painfully slow writer, so no guarantee they’ll all get done, And as with most works-in-progress, the final drafts will likely look very different from the first, so what good are those first drafts to anyone but me?

Slow writer, shuttling between projects, extensively revising — many reasons here why I have so many of those scraps of fiction around. Many reasons, too, why I wouldn’t want anyone reading them now — or ever.

Again, not that anyone would want to, I know. And yet, I wonder how many authors think about this issue. When I told my wife, Tara, who’s also a writer, that I was considering an essay on this topic, she admitted that she and a friend made a pact years ago that if one of them died, the other would come and burn the journals, the manuscripts, all the writings.

Interestingly, that was exactly the request Franz Kafka made of his friend Max Brod, but if Brod had kept the promise, we wouldn’t have either of Kafka’s masterpieces, The Trial or The Castle, both unfinished at the time of the author’s death.

Wishing long writing lives to us all as I finish this post!

The Beauty of Brevity

In praise of tales that cut to the chase